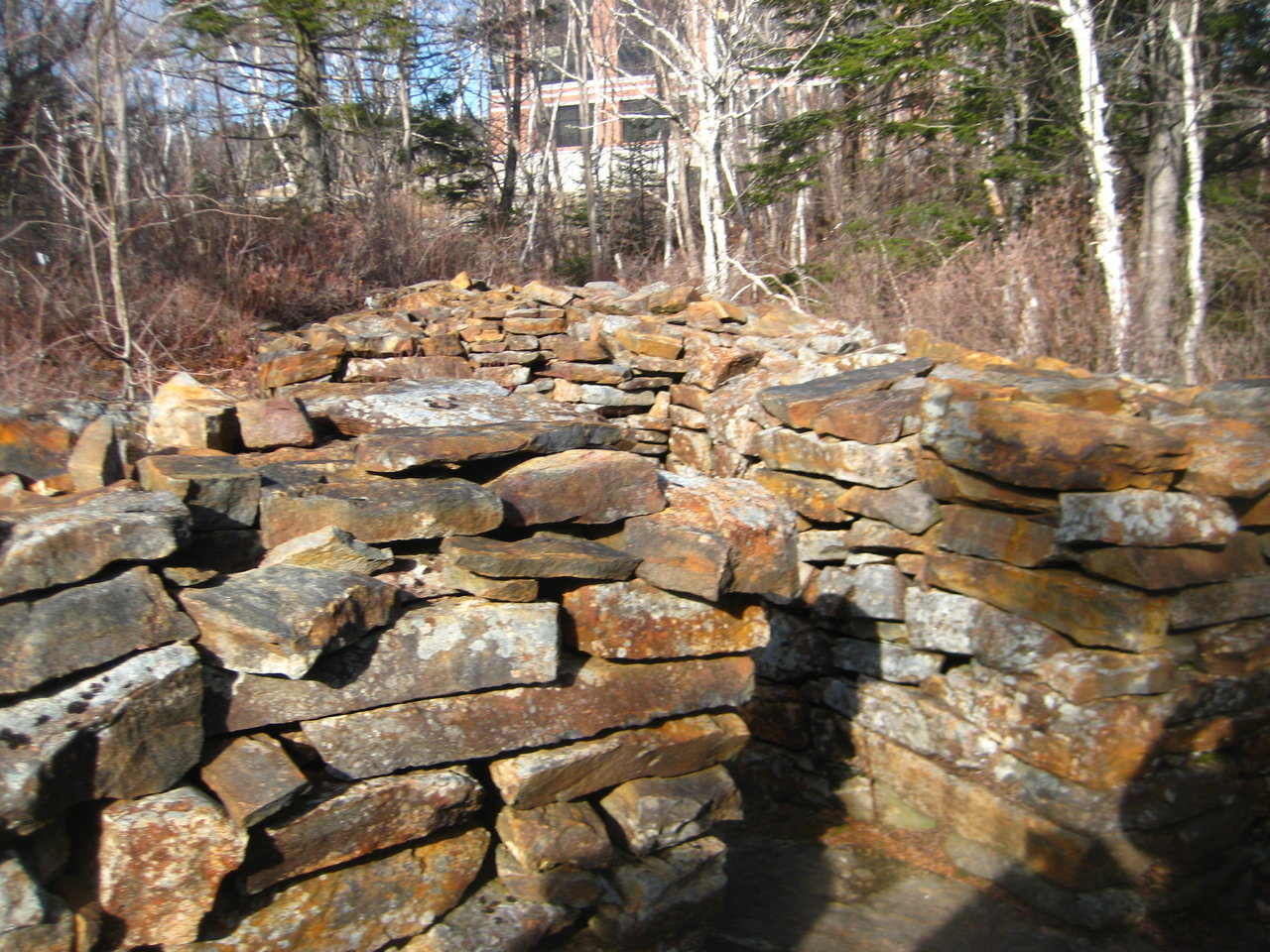 Located on the south side of Geizer’s Hill (Main Avenue and connecting Washmill Lake Drive), in Bayer’s Lake Park.

A dry-stone wall (no mortar was used in its construction) was discovered several years ago during an expansion of the Bayer’s Lake Park.
The rock-wall extends more than 120 metres long and measures as high as two metres. The rocks are described as flat-surfaced ironstone slate rocks. The wall is situated on the edge of a steep hill overlooking Chain Lake Drive. That part of Chain Lake Drive was an old travel route; starting at the top of Geizer’s Hill, a crude road extended to St. Margarets Bay Road.

Also found in the area was a rock foundation of a five-sided building. The foundation is built of flat-surfaced iron stone rocks. The structure is 1.25 metres tall and 1.30 metres thick. There is an entrance and a fully enclosed stone box inside the building, (could be a cellar to keep food cool or to store ammunition.) The rock structure had not been disturbed in 200 years according to a Lichenologist who studied the site .

Around the corner from this foundation, a staircase of rocks are found going up a hill but lead to nowhere. To the right of these steps are the remains of what look to be a rock foundation.

The site has a view of Bayer’s Lake, First Lake, Second Lake and Long Lake.

There have been previous archeological surveys but no older artifacts were found. The area is deemed a “Special Place” and is protected under the Nova Scotia Special Places Protection Act since 1991.

Some believe it was built for Prince Henry Sinclair in 1398 during a legendary search for the Holy Grail. Others say it is evidence of an advanced, pre-Columbian civilization, or even date back thousands of years before the Viking era. Some writers have suggested links to the Knights Templar and Oak Island.

Many believe that the site was used for military purposes, possibly to protect Halifax from the back- side, since the long rock- wall located on a steep hill, would have overlooked the rough road leading from Geizer’s Hill to St. Margarets Bay Road. St. Margarets Bay is where they would have expected the enemy ships to sail into before assembling an overland attack. The military had explicit records but this site in not mentioned in any military documents, map or land record which makes it seem unusual that the area was used for military use. Also no musket balls, or shell casings was found.

The area was also occupied by the early German settlers who were given Land Grants there over 200 years ago, and who lived there before moving down closer to Dutch Village Road. Some people scoff at the idea, wondering how the German’s could grow any food in the rocky soil. But how do we know what the area looked like over 200 years ago? It is proven that the German settlers did have the original land grants there and these hard working, rugged settlers could well have kept animals high up in the hills. Animals such as cattle or sheep. Gottieb Shermiller and John Kuntz were two of the settlers who had land grants in that area, before moving down closer to the Dutch Village Road.

Jonathan Fowler, an associate professor in the anthropology department at Saint Mary’ University studied the site in 2017 with the help of $5,475 from the Halifax Regional Municipality and $2,000 from SMU. He used an X-ray fluorescence analyzer to look for traces of human activity in the soil, particularly phosphorus, which can indicate the presence of human or animal urine or feces, bone, meat, fish of plants. While the tool did not find elevated levels of phosphorus, Fowler said he still flavours the animals husbandry explanation. A sheep pen might be expected to produce higher levels of phosphorus, but the levels at the site could be low simply because it wasn’t used for long or for many sheep. Fowler did say that the five-sided structure strongly resembles similar enclosures in the United Kingdom used to isolate small numbers of sheep for examination or treatment. The wall he says could have been used to help herd the sheep toward the pen, as in the case at similar Scottish sites. Fowler also said that there was no evidence of domestic occupation such as broken pottery, glass, food waste.

Definitely more research must be done in this area. This is our History! The area is protected under the Special Places Protection Act for NOW.

Members of the Fairview Historical Society and other interested people had a beautiful day on Sunday, January 27, 2019 for a trek to view the mystery walls in Bayer’s Lake.