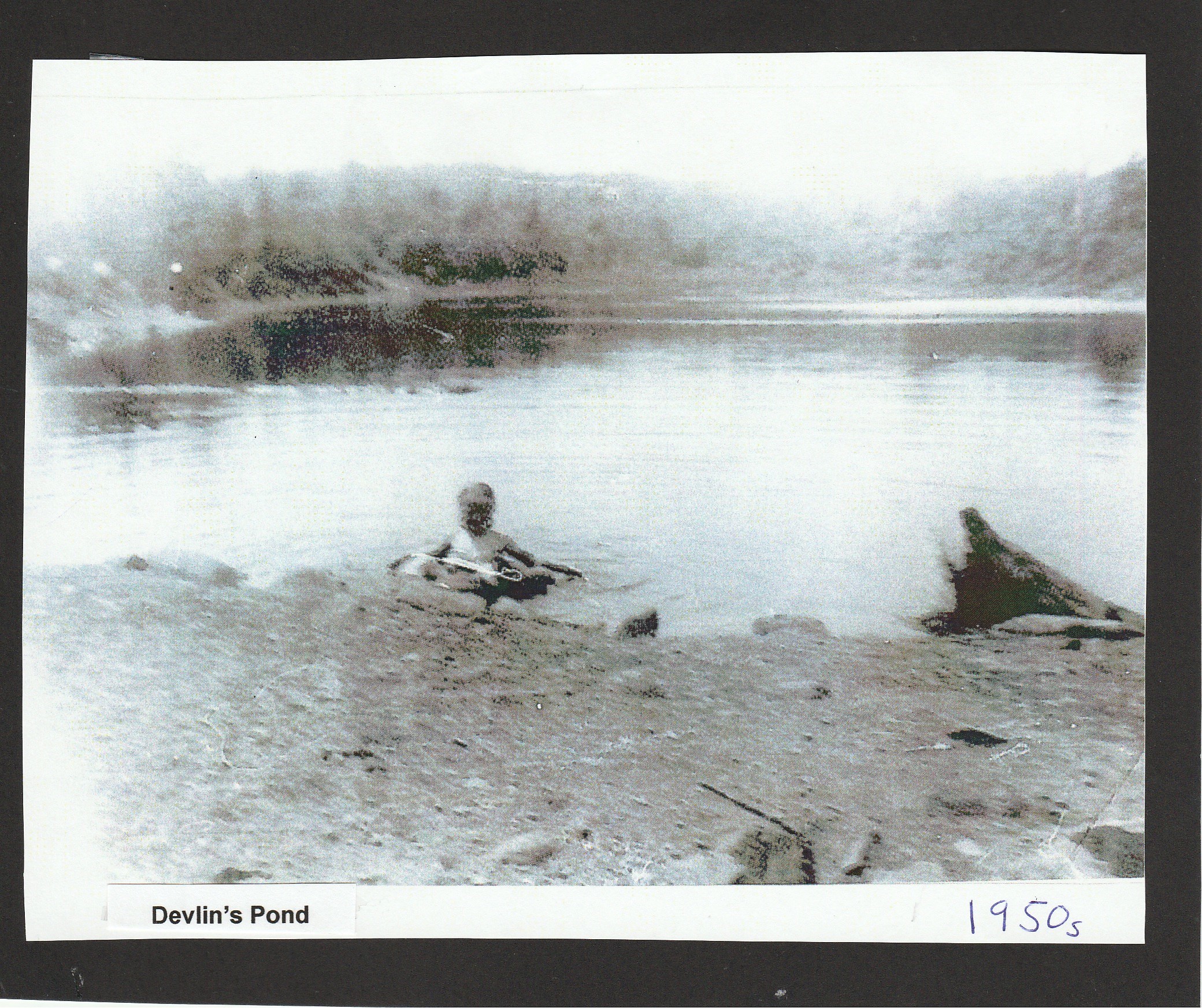 The pond was named after John Devlin who owned property there in 1921 until at least 1927. The children of the area called it “Devil’s Pond.” The pond was a popular area for the people of Fairview to swim in the summer, and to skate in the winter.

A brook from the pond flowed down Melrose Avenue, passed under the Dutch Village Road (today called Joseph Howe Drive) and the railroad (today a walking trail), then turned north through a bog near Calvin Presbyterian Church. It then crossed under Bayers Road and continued down the side of what is now Desmond Avenue near the United Baptist Church. From there the water flowed under the railway tracks before emptying into the Bedford Basin at Fairview Cove.

In the early 1950s when the Bayers Road United Baptist Church was being built, the brook flowed beside the church, and during the construction a plank bridge was used over the brook. Mr. McGray, a member of the work party, fell off the bridge into the brook while wheeling tiles for under the floor. Later a culvert was installed and a small bridge was built over it to provide entry from the
Desmond Avenue side. Today the brook is covered over and a sidewalk placed over it.

Devlin’s Pond was drained when Melrose Avenue was extended and today houses and apartments occupy the former pond site.

In September 1951 an article in the newspaper reported:

Fairview News for September 1, Dangers of Swimming in Pond Cited.

It has been advised by Dr. J.H. Charman, County Health Official, that in accordance with precautionary measures being taken in the present Polio situation that swimming in Devlin’s Pond is to be avoided. Devlin’s Pond, “the old swimming hole” for generations of residents is a favourite spot for the younger members of the district during the summer months. At present it is very low and apt to be slightly brackish, and parents would do well to keep the children from swimming in it until all danger is past, it was stated. Residents are also reminded that the three schools in the district will not open Wednesday, September 4, and will remain closed until further notice from the Armdale Board of Trustees.

Sections taken from the book, “Sawbones” by Devonna Edwards

Polio: Poliomyelitis was one of the most terrifying diseases when it was at its height in the 1940s and 1950s. It is an acute viral disease marked by inflammation of nerve cells of the brain stem and spinal cord, often referred to as Polio or Infantile Paralysis. The disease is highly infectious and can be spread from person to person rapidly, occurring mostly in children. The virus enters the mouth usually from contaminated water or food that was in contact with stool of an infected person. The virus multiplies in lymphoid tissues in the throat and intestines. The virus causes muscle weakness and paralysis while attacking the body’s central nervous system. Complications include paralysis, most commonly of the legs and paralysis of the muscles involved in breathing and swallowing, which can be fatal. Sometimes there are not symptoms in those who have Polio, but the infected person can still spread the virus and cause others to
develop Polio symptoms.

Symptoms of Polio include: fever, muscle weakness, nausea and vomiting, while others develop severe muscle pain and stiffness in the neck and back. The incubation period is commonly six to twenty days with a range of three to thirty-five days.

Before the summer of 1951 ended, over 400 cases had been diagnosed, and most were treated at the Victoria General Hospital in Halifax. At that time the Polio Clinic was operated under the direction of Dr. Cecil Kinley and Henry Reardon.

A machine called the Iron Lung helped patients with Polio to breathe: patients were placed into the central chamber, which was a cylindrical steel drum. The head and neck remained outside of this chamber, with the rest of the body remaining in the sealed, airtight compartment. A mirror was positioned over the patient’s head, which helped them view the surrounding area. Pumps controlled airflow by decreasing and increasing the air pressure within the chamber, particularly on the chest. When the pressure fell below the pressure within the lungs, the lungs expanded and atmospheric pressure pushed air from outside the chamber through the patient’s nose and airways to keep the lungs filled; when the pressure raised above that within the lungs, the reverse occurred, and air was expelled. In summary the Iron Lung caused air to flow in and out of the lungs of the patients, which helped them to breathe. The Iron Lung was invented by Sir Henry John Gauvain and was originally used for the treatment of coal gas poisoning. At the hospital many “Iron Lungs” were used at one time when Polio was rampant.

The first Poliomyelitis Clinic was at Anderson Square, in the former Army Barracks, located at the corner of South Park Street and South Street.

In 1949, the Polio Clinic was removed from Anderson Square to the wooden Annex at the Victoria General Hospital, which had been erected in 1940, and was demolished in 1954. The brick North and South Wings of the old Victoria General Hospital were demolished but the center part of the structure, which included the infrastructure of the original hospital, was left intact. The West Wing of the original hospital was not removed but rather remodeled and the Polio Clinic was moved to this location. During the Polio epidemic in the summer of 1951, the need for more beds became so acute that other facilities had to be opened and that is when a portion of the old Jubilee Building (which was awaiting demolition) was reopened. It opened within twenty-four hours, after the decision was made; that is how desperate the need was.

In the 1950s, Polio fear was so rampant that in Halifax, children under the age of sixteen years old were prohibited from entering churches and theatres. In the summer when Polio tended to be prevalent, empty pools, school closing and deserted streets became familiar images in Canada. Government officials blanketed neighbourhoods with DDT, a harmful pesticide later banned, as a
desperate measure to combat Polio.

The 32nd President of the United States, Franklin D. Roosevelt was stricken with Polio in Canada in 1921 at the age of 39 years old. At that time he was a lawyer working in New York. He joined his family at their vacation home on Campobello Island in New Brunswick (just off the coast of Maine, U.S.) where he had spent his summer holidays since he was a boy. When he first contracted the disease the United States refused to admit him back into his country but his father pulled some strings and got him admitted to a New York hospital when he was near death. He was transferred there by boat and train, a long and painful journey for him. The illness left him permanently paralyzed from the waist down. In 1938 he founded The National Foundation for Infantile Paralysis leading to the development of the Polio Vaccine. 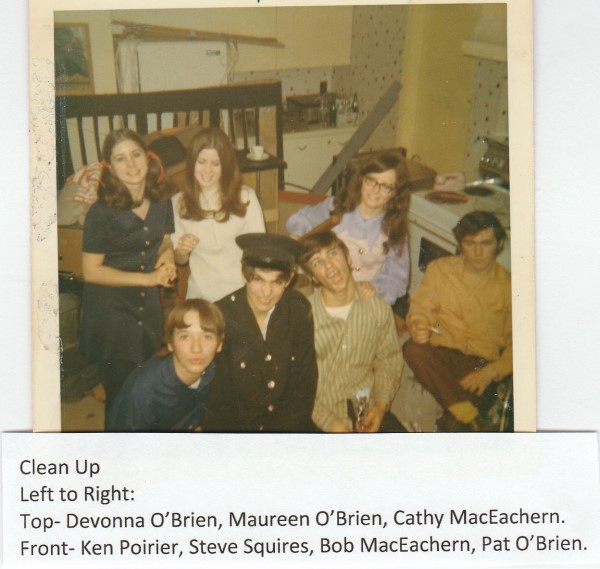 Submitted by Don Edwards Fairview Youth Centre It was a busy year for the youth of Fairview. The Fairview Legion Youth Centre was formed and through that centre the Fairview Phillies (Midget) Baseball Team was established as well. John O’Brien, owner of O’Brien’s Pharmacy, was the backbone and the reason for the Centre’s existence. He… 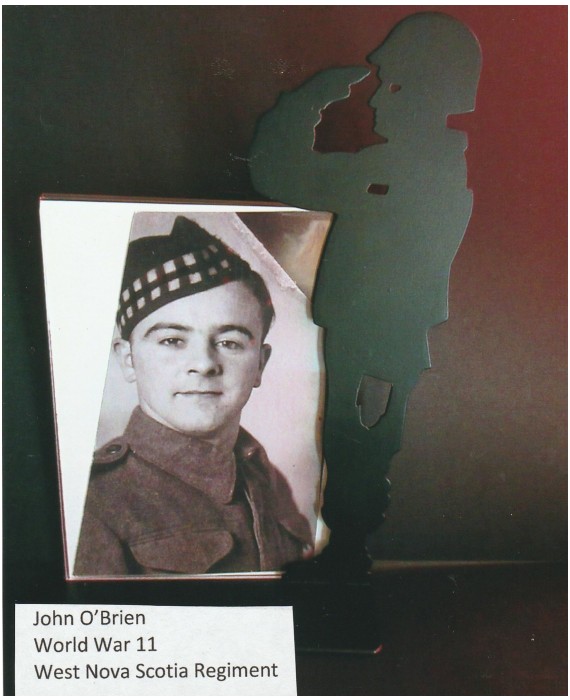 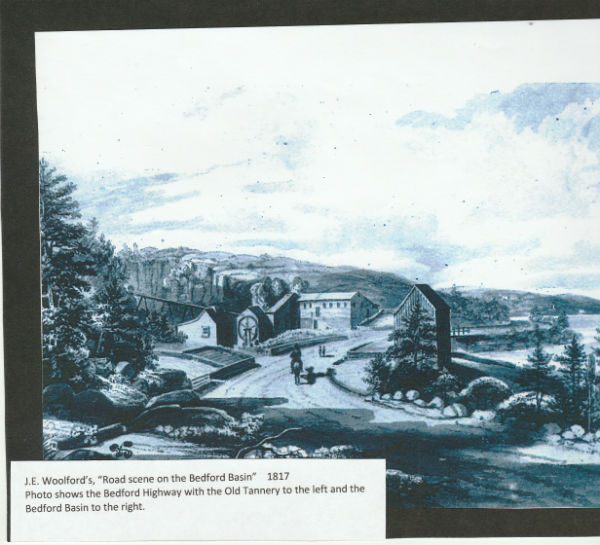 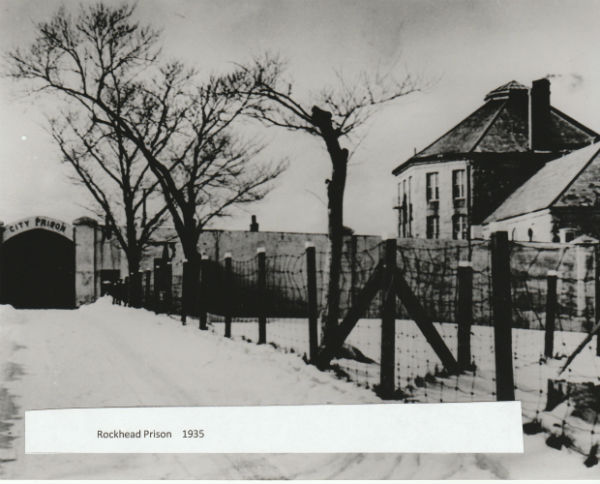 Submitted by Devonna Edwards The Naval Cemetery is a small military cemetery located in C.F.B. Stadacona on Gottingen Street, Halifax. The cemetery is situated behind Admiralty House (Maritime Command Museum) on a hill that slopes down to Barrington Street and is enclosed by fencing with a locked gate. In 1894 the cemetery occupied over four…