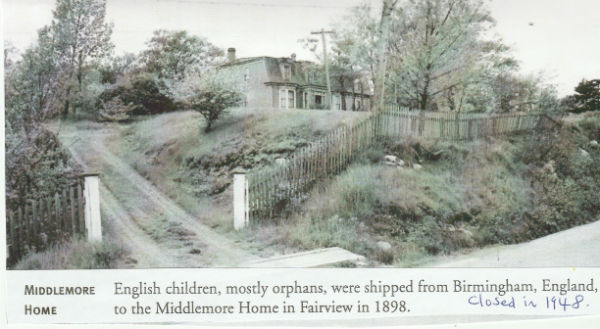 Located in Fairview on the Bedford Highway. It was situated on a high hill next to the Rock Quarry (now a car dealership occupies the site.) In later years the Harbour Lights Hotel (1948), the Wandlyn Motel and then the Bayview Inn all occupied the former Middlemore Home. Today (2019) Icon Bay, a large residential and office complex, was built on the site after the Bayview Inn was demolished.

Middlemore Home was started in Fairview by a wealthy British man Sir John T. Middlemore. He had a great affection for children and because of this he became a pioneer in rescuing homeless, orphaned, abandoned, poor, illegitimate or destitute youngsters from Britain and this is how the child migrant program had its beginning.

The program was started in the best interest for the children in Britain, they would provide a work force for Canada and other countries and the children were supposed to be provided with their education, food, housing, and a Christian upbringing. Children as young as three years to eighteen years old were shipped from Liverpool, England to Canada (Ontario, Quebec, and Nova Scotia.)

Before Middlemore Home was built it was found inconvenient and expensive to provide quarters for these children, the girls were sent to the Women’s Christian Temperance Union (W.C.T.U.) headquarters and the boys to the Industrial School on Quinn Street in Halifax, until they could be sent to their new homes throughout the provinces. When the ship carrying these children arrived in Halifax, it docked at Pier 2, where they were taken to a shed to be cleared medically. If any of the children were found to have a contagious disease, they were quarantined at a hospital within the immigration sheds. If they had a deformity that was severe enough, they were returned to England. Advertisements were put in the newspaper inviting families to send for a boy or girl who would provide an extra hand to help on their farms. In July 1898, the Forrest property beside the Rock Quarry at Fairview was purchased for $1,000 by Mr. Middlemore. He built a large house to be used as a distributing home for the English children whom he brought across the Atlantic yearly. The children did not reside long at this home before being sent to their new homes usually by train.

The Middlemore Home operated for fifty years closing in 1948. The children John Middlemore took were children that didn’t have any chance for a descent future in England, some whom the magistrates had asked the Home to take, some brought by despairing relatives, others actually rescued from bad homes and bad parents by John himself, sometimes at considerable risk to himself. The conditions in the slums were terrible. John Middlemore had good intentions, he thought he could help these children. When he was charged with taking good future citizens away from England, he replied, “No, I am taking away what would only be diseased tissue if it were left in England, but in Canada it grows into healthy flesh and blood and sinew.”

Middlemore Home was also a place where the children could return to if their new home was not satisfactory. Sometimes the foster parent returned the child to the Home for many reasons such as the child was too small to work on their farm or they were lazy, etc. Proper supervision was suppose to be in place for follow-up visits to various locations to make sure the child was thriving but sometimes that did not happen. When they did check if the conditions were found to be unfavorable the child was removed and taken back to the Middlemore Home to be replaced to another foster parent. The foster homes were always notified prior to a visit and sometimes when the officials arrived there the foster parents made sure that the child was elsewhere. Also some children were too afraid to speak out against their foster parents and in some cases children were never heard from again, the foster parent just would say that they ran away. Many Home Children were fortunate to be welcomed by loving foster parents who adopted them into their families but many more Home Children suffered greatly, afraid, lonely, unloved, abused verbally, physically and sexually, and made to work long hours with little food.

The child was indentured until the age of eighteen than they could go where they pleased. Up to the age of fifteen years old they were to be fed, clothed and sent to school. From age of fifteen to seventeen years old they were not clothed but were paid $3.00 for a month wages and $4.00 a month from seventeen to eighteen years old. While living at Middlemore Home the children all had chores to do, six days a week for long hours. The boys sawed wood with a bucksaw and had to pile the wood. There was also a large vegetable garden on the property which the children had to look after, planting, weeding, picking, etc.

They also had chickens which the children had to feed, collect the eggs and keep the chicken shed clean, sometimes they were also involved in the killing of the chickens for supper. The children ate porridge for breakfast and never seen a whole egg as the eggs was made into egg gravy (more milk than egg.) They also had to milk the cows, feed them and keep the barn clean.

The Home had a cook but the girls had to help in the kitchen preparing meals, washing dishes, and doing household chores. For entertainment they had to use their imagination, in the winter they would slide down a hill behind the Home with whatever they could find, shovels, etc. In the mild weather, they could play outside when their chores were done, making stilts or crude bow and arrows. On Sundays they were marched down to attend church and Sunday-School at St. John’s Church on Kempt Road (located in St. John’s Cemetery.)

Many Home Children when they became adults did not want to talk about their childhood because the memories were too painful and there was a sigma to being a Home Child. The children were called Nobody’s Children, Street Waifs and Strays along with many other names and some people would not associate with them. Ron Eld, a friend of my father (John O’Brien) came from England at the age of five years old. His parents were not able to look after him but he was one of the lucky ones as he was adopted by Mr. Clare Eld and his wife who owned a grocery store at the corner of Creighton and Stanley Streets in Halifax. He was treated well, led a normal childhood and when older went off to fight in World War 2. When he came back from the war he married, had children and passed away at the age of ninety-two in 2009.

When Middlemore Home first opened Rev. and Mrs. Roughs were in charge of it, they both had done previous missionary work in China. In 1912-13, Mr. J.S. King was superintendent. In 1914 Mr. and Mrs. Ray became superintendent and matron of the Fairview Home. Mr. Ray was previously a Middlemore boy himself. He emigrated to Canada in 1890 and when he died in 1931, his wife took over the operation of the Home.

An estimated 100,000 child immigrants from Great Britain were sent to Canada; 6,000 were sent to the Maritime provinces through the Children’s Emigration Homes in Birmingham, England. Today the Home Children descendants make up twelve per cent of Canada’s population. A plaque commemorating the former Middlemore Home once occupied the wall in the Wandlyn Motel, then the Bayview Inn but suddenly could not be found when Heritage inquires were made regarding it at the time the Bayview Inn went up for sale.

Reunions of the descendants of the British Home Children are conducted yearly throughout the Maritime provinces. Middlemore Children are sometimes confused with the Emigrant Children that were sent here from England during World War 2. These children were sent here for their own safety when their country was heavily bombed at that time. After the war the children were shipped back home to England.

It was rumoured that there was an old Acadian and Indian Burial Ground in back of where the Middlemore Home once stood. Through neglect and time it disappeared and supposedly some graves fell into the Rock Quarry. This grave yard is not to be mistaken for Titus Smith Burial Ground in Titus Smith Park on Titus Street. In the Provincial Museum and Science Library at the Nova Scotia Archives, Reel 3928, while talking about Duc d’Anville’s men it stated that in 1746 that it was possible that some of his men were buried in the old Acadian Cemetery at French Landing (Bayview Road) between Fairview and Rockingham. Also in earlier years Chief Lonecloud (Medicine Man of the Mi’Kmaq) told of an Old Indian Burial Ground that once occupied the same area.

In March 2010, development was halted on the new complex until archaeological digs were conducted before building could commence but obviously nothing was found because today the Icon Bay complex is completed.