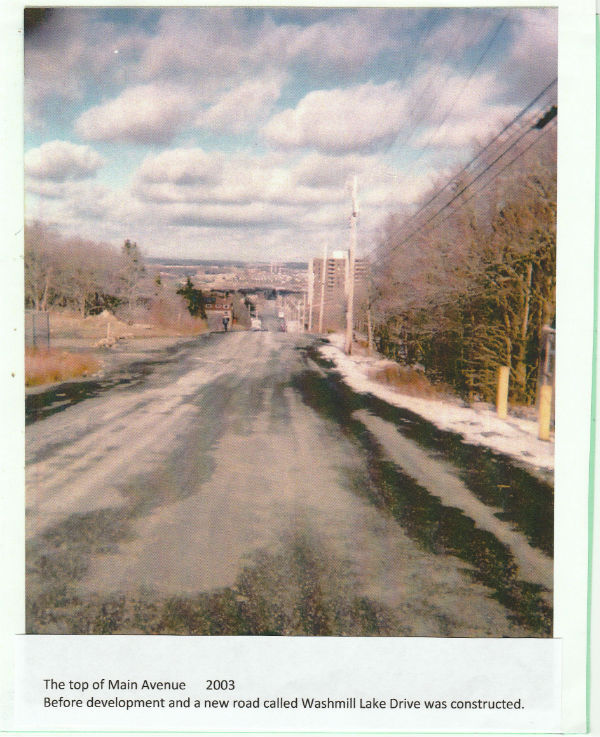 Today the areas location is described as the top of Main Avenue and Washmill Lake Drive.

Years ago the lower part of Main Avenue was known as the Duke of Kent Street and informally known as Lightning Hill because in the winter children, from the area, would sled down the steep hill on their homemade bobsleds, as fast as lightning (so to speak.)

Geizer’s Hill (Mountain) was named after Wilhelm Geizer. He came from Hanover, Germany to the Dutch Village in 1752 and married Rebecca Faulkenheim (Hyde) who was a fur dresser. Wilhelm then went to Lunenburg and worked as a cooper there. The Geizer family did not return to the Dutch Village until many years after the 1762 grants of land were made, and so Wilhelm Geizer’s name does not appear in the original grant. He decided to move closer to Halifax and was granted land on the Nine Mile River on the St. Margaret’s Bay Road where he built a house on land bordering Governor Lake. Later he decided to mover even closer to town so he relocated to a house he built on top of Geizer’s Mountain on land he purchased from a person called Gebhard.

One day while hunting in the woods, he met a stranger who admired and asked to see his gun. After examining the gun, the stranger aimed it at Wilhelm and fired, wounding him. Wilhelm crawled home on his hands and knees but later died of his injury. The stranger was later caught in Lunenburg in possession of the gun. He was a sergeant who had deserted the army. He was brought to Halifax, tried and convicted and hanged on “The old Willow Tree”(corner of Quinpool Road and Robie Stree.)

Hubert Smart told me that there was, at one time, a busy logging industry located at the top of Geizer’s Mountain. The logs were taken on huge sleighs from the top of the mountain to the Irving Oil Wharf in Fairview Cove, where they were put into the Bedford Basin. Small boats took the logs up the Bedford Basin to Bedford Moirs Mill. Children would often hitch a ride on the huge sleighs coming down Geizer’s Mountain. The Log Camp Cook House was located where the Trailer Court is now located on Main Avenue.

“Television Begins” On Monday December 16, 1951, CBHT begins programming, which will serve the Halifax-Dartmouth area immediately and when the full wave stack antenna goes into operation, in the future, will provide television service to a much greater area in the central part of this province. The present signal will be transmitted over a fifty foot two-slot wave guide antenna with an output of thirty kilowatts. When the five hundred foot cylindrical antenna is completed the transmitter will beam energy from a height of almost a thousand feet above sea level. Geizer’s Hill in Fairview is the site of the transmitter, an excellent location for comprehensive line-of-sight transmission. On the ground, beside the CBHT College Street Studio building, a seventy foot micro-wave antenna mast can be seen. Its purpose is to beam television signals originating in the College Street Studio to the transmitter site on Geizer’s Hill from whence the signal is transmitted out over air to be received on local television receivers. The day may not be too far distant when baseball, hockey, football and other events will be seen at home as they happen, possibly within two years or so when the micro-wave net-works links this city with central Canada and the United States. Transmission of the Test Pattern is a vital part of the Television Broad Casting.

Around 1809, the old Chester Road from Halifax ran over Geizer’s Hill and across the barrens, near Six Mile Lake and joined the present St. Margaret’s Bay Road, very close to where
Lock’s Eight Mile House once stood. This Geizer’s Hill Road was the main highway to St. Margaret’s Bay Road until a road was constructed from Eight Mile House to the head of the North West Arm.

Sam Purcell was a name remembered by older Fairview residents. Edith and Roy Deal told me that when they were kids Sam would go around the Fairview area with his horse and wagon collecting garbage. Roy said that Sam’s horse had only one gate and knew Fairview better than Sam. He was a little eccentric (rumour said that he was injured in the Halifax Explosion of 1917) and parents warned their children to beware of him. John Hurst said that Sam lived at the top of Main Avenue, up where the Power Line is now. He lived with his parents who were in their late fifties or early sixties in the early 1950s. He also said that Sam dumped his garbage in the woods across the road from his house on Main Avenue. Ann (Veinotte) Tattrie said that Sam would jump out of the bushes and scare her and her friends when they went to Sunday School. Children in the area would sing this little song to him when he went by in his horse and wagon:
“Sam, Sam the dirty old man, washed his face in a frying pan, combed his hair on the leg of a chair and died with a tooth ache in his ear.”

Angus Smith (Gump) was a well-known Fairview man who use to live at the top of Main Avenue with his family. He was born in 1925 and died in 2000. The road leading up to his house was at one time a long, winding, narrow road surrounded by thick forest and without street lights. Near his house stood a five hundred foot transmission tower with blinking lights. Fairview residents joked that Gump had the largest neon light in the world above his house. He was a friendly man and everyone knew they were always welcome to stop off at his house for a friendly chat and refreshments. He was always caring for strays of Fairview, people who had no place to live; Gump would let them stay at his house until they were able to get back on their feet. Prior to Gumpy Smith owning the property on the top of Geizer’s Hill, a man by the name of Mr. Clark lived there. He was a bootlegger who also made his own home brew. He needed crutches to get around and would travel to town with his horse and cart always having a blanket over his legs. John Hurst said that he looked like President Roosenvelt. Mr. Clark kept ducks and chickens on his property; a few local boys took his ducks and brought them back to the camp at Susie’s Lake. The boys were plucking them as they went, police followed the trail of feathers and caught the boys. One boy was Gump Smith. Rumour said that some of the boys got six months in jail for thief.

At one time there was an old two storey concrete building located deep in the woods at the top of Geizer’s Mountain (Main Avenue and Washmill Lake Drive.) The youths of Fairview often gathered at this isolated building to have parties, they called it the Spanish Fort. Near the old building there was a metal anchor in a huge rock which possibility held wires for an antenna. For years no one knew what the building was used for and it became known as the Mystery Building. John (Jack) Butler did extensive research on this building with Collections Canada (Library and Archives Canada.) He concluded that in 1924, News Traffic Board was incorporated to purchase and take over a radio station in Dartmouth and the radio station in the course of erection at Geizer’s Hill in the county of Halifax which was partially constructed, never completed and never used as a Radio Transmitter. The building was remote with no road leading to it. For many years a path lead to the site from the Nova Scotia Power Transmission Lines (Mainland Common Trail.) When Washmill Lake Drive was constructed, the old building could be seen standing high on the hill next to the new road. The concrete building was demolished in 2012 and now an apartment building called The Grand Haven Estates stands on the site.

On May 13, 1930 Goldie Drake, a pretty five year old daughter of Hollis Drake and Gertrude (Purcell) Drake went missing on Geizer’s Hill. The child’s mother said that while walking up to her parent’s house on Geizer’s Hill with her daughter, she fainted and when she awoke hours later she was alone and she could not find Goldie, her basket, and her coat or hat. She was hysterical when she arrived at her parent’s house. An extensive search with 250 volunteers combed the dense underbrush, ponds and thick woods which surrounded the rocky barren road on Geizer’s Hill.

On May 14, five of the searchers found Goldie’s badly burned body hidden beneath moss and brush, 100 yards west of the road running over Geizer’s Hill. In the ashes near the spot where the body was found lay a creolin bottle, a soft drink bottle and two marbles of coloured glass, trinkets the child had in her pocket. Three half-pint creolin bottles, an empty match box, a torn red sweater coat were also noticed in the vicinity. The spot where the body was found was only a short distance from the part of the rock strewn path, over the mountain where Mrs. Drake said she fainted.

The mother of the dead child confessed to choking her daughter to death. “Yes I did it, I confess, I killed the baby, we owed rent and a lot of bills and my husband was out of work.” “I went into the woods and killed the baby, she had not been annoying me.” “I didn’t want anyone else to have her and I thought I could not look after her myself.” Mrs. Drake had planned to poison herself with creolin after the murder but she never took the poison. She was taken to the county jail and then to the Grace Maternity Hospital where it was necessary for a nurse to remain with her at the hospital both day and night. In view of her physical and mental condition, Magistrate Doty said that it would be necessary to remand her for two months for examination.

I was unable to find further information on what happened to Mrs. Drake but assume that she was too mentally unstable to go to trial.