In the Halifax City Directory 1912 to around 1934 it stated that Bayers Road commenced at Oxford Street and ran west to Dutch Village Road.

Thomas Bayer built his picturesque homestead in 1838 on the north side of Bayers Road, about eight hundred feet west of Oxford Street. The east and west wings were later added to the house. Many large trees stood in front of the house, which was formally separated from the road by a low stone wall topped by a neat picket fence. The house was destroyed by fire November 1939. 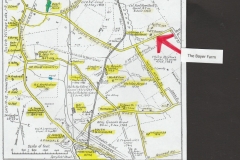 The narrow dirt road that ran in front of his old homestead, taking the early settlers from the Dutch Village to and from Halifax, was later known as Bayers Road. Not many motorist who travel this main road are aware of the rich history in the area. Today 2021, construction to widen the paved road has recently been completed, allowing the busy traffic to flow smoother. The original 94 acre property was granted to Col. Frederick Hamilton but he sold it to George Bayer on Feb. 6, 1764 and George later added another 80 acres to his property. George Bayer (Bayers, Beyer) emigrated from Rotterdam, Germany on board the Pearl in 1751 and landed in Halifax. He started a bakery which became quite successful. He obtained a contract to supply the many ships on station with soft bread and he also supplied the troops posted in Halifax at that time.

The original George Bayers farm was located on the west side of Windsor Road (Windsor Street) on the outskirts of the town’s settlement. The original house he lived in was built in 1765 and contained part of an older log cabin built by Colonel Hamilton and to which an addition was added to its northeast end. It was located some four hundred yards north of the present day Bayers Road at a place called “The Willows” about 493 yards north of Young Street. The house burnt down about 1867.

When George Bayer died, the 176 acre property passed on to his second son, Phillip, who was a trapper and trader in furs with the Mi’Kmaq and who lived in the old house at “The Willows.” His only son John, died before his father and after Philip’s death about 1838-39, the property was divided into two parts, the original homestead and north section going to his elder grandson, John, who married a daughter of the well-known Titus Smith and whose son was Rufus Bayer.

The southern part became the property of his other grandson Thomas, who built the picturesque farmhouse on Bayers Road. The Middle Peninsular Blockhouse, one of the town’s forts that was used as a defence against the Mi’Kmaq,.was located on the Bayers property near the corner of present day Connaught Ave. and Bayers Road. The foundation of the blockhouse was still seen in 1848 in the hollow below Philip Bayers pasture.