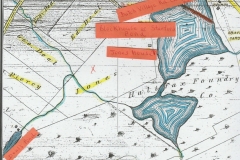 Located in Fairview, on Dutch Village Road (today that part of the road is renamed Joseph Howe Drive). Jones Hill was a large hill on property owned by a family named Jones. Joseph and Catherine (Raines) Jones lived in a house at the top of the hill. In the front of their house a very long narrow dirt drive-way leading down to Dutch Village Road.

The Blockhouse Pond later called Stanford’s Pond was located on one side of the hill, years later the pond was filled in and railway tracks were built there. On the other side of the hill was an area which later became Howe Avenue, today renamed Joseph Howe Drive. 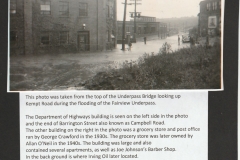 Donnie Poole, grew up in Fairview, living on the bottom of Main Avenue. His parents owned Poole’s Bakery which was located behind his house on Main Avenue. When Donnie was a young lad in the early 1940s, probably around 1944, he delivered groceries on his bicycle for Allen O’Neil.

O’Neil’s Grocery Store was located on Kempt Road across from the Department of Highway building near the Bedford Basin. In the 1930s the store was owned by George Crawford who also had a post office in his store which Fairview residence used before the post office on Main Avenue was developed. Donnie told me that after Catherine Jones husband died, she cooked for the railway men and Donnie delivered groceries to her, going up that long driveway to the top of Jones Hill.

She made a couple of meals a day and the employees of the railway would come to her house to be fed. 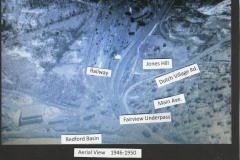 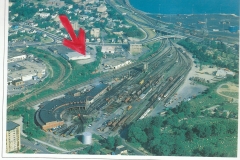 In the 1950s a fire burnt the house down and I can remember seeing the flames shooting up in the sky from my house on McFatridge Road.

Today the Maritime Tel and Tel Company is no longer there, but other business now occupy the building: Accel Physiotherapy and Sport Performance Centre, H&R Block and Joseph Howe Family Dentistry. Railway tracks that once curved the back of the hill have been removed and today Joseph Howe Superstore parking lot occupies the site.