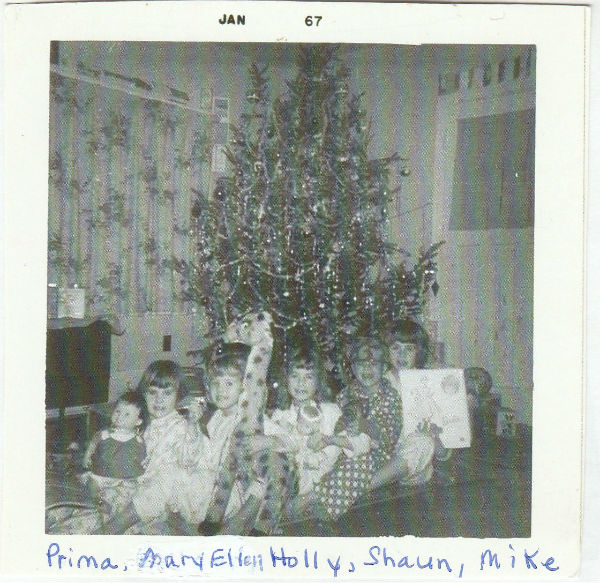 Memories of growing up in the 1950s and 60s in Fairview, Nova Scotia, bring back wonderful recollections. As the holidays drew nearer, there wasn’t much school work accomplished as we were all too busy making decorations. A bare Christmas tree stood in the corner of our classroom like Cinderella waiting for her ball gown.

The annual school Christmas concert added to our delight. In late November, the music teacher undertook the task of preparing her little singers, actors, and musicians to perform in front of a live audience. Our poor, suffering teacher— how her head and eardrums must have ached with all the clatter and noise. But with patience and perseverance she shaped her pupils into dedicated entertainers.
The members of the band wore short, colourful capes and a small pillbox-type hat that tied under the chin. Singers belted out Christmas carols and for once it didn’t matter what colour bird you were, everyone got to sing (A blue bird meant you were a good singer, a yellow bird meant fair and a red bird meant you were terrible.)

Students also acted in different plays. There was a bustle of activities at this time, and on the night of the concert everything came together. If there were any glitches, no one seemed to mind. The auditorium was filled to capacity. A huge, wonderfully decorated Christmas tree stood at one corner of the stage. Pupils wearing their very best attire were seated in their classrooms, waiting for the teacher to tell them, “It’s show time!” Butterflies danced in their tummies as the children walked single file to a narrow room beside the stage. Finally, the curtains opened and there were hundreds of faces looking back.
At home the excitement was unbearable. Mom spent days making our house shine, and I remember the smell of Johnson’s wax on the floors. Christmas cards arrived daily. After school was out for the holidays, our letters were mailed to Santa and we children began shopping for our parents. Old Spice aftershave for Dad and Evening-In-Paris perfume for Mom. Woolworth’s at the Bayer’s Road Shopping Centre was the popular shopping place for us children.

Early on Christmas Eve it was off to confession. On the way home I remember the snow falling softly and sparkling in the moonlight. The Christmas lights on the houses looked so festive and everything seemed to be so tranquil and hushed. Arriving home, the smell of spices filled the air and there was always a large bowl of fruit overflowing in the centre of the table. Clare candy and Pot of Gold chocolates were also stacked in dishes through the house—a real treat!

Our Christmas tree stood in the corner of the living room, but was not decorated until all the family arrived home to help. My dad worked on Christmas Eve at his pharmacy (O’Brien’s Pharmacy on Dutch Village Road.) He tried to close the store early but not before several calls were made to him from home, “Bring home more lights, we need more tinsel.” When Dad finally arrived home he put the star on top of the tree and then the decorating began. The tree was decorated in record time as there were so many helping hands.
Next, it was time to hang our stockings on the mantel, our longest sock of course. We hurried to put out Santa’s cookies and milk, and then off to bed we went for the longest night of the year. Time and time again I told my siblings, “ Go to sleep; Santa won’t come if you’re awake!”

Struggling to keep our eyes closed, we were sure we heard Santa and his reindeer on the roof. Finally sleep would claim us only to awake at three or four in the morning to be told by Dad, “Go back to sleep, Santa hasn’t come yet!” Around 5:00 A.M. we crept down the stairs. Santa had arrived. Some of the gifts I remember are a beautiful ballerina doll, dishes and cut-out dolls.

My brother Nonnie (John) got a full Davy Crocket outfit and rifle. Brother Patty received a cowboy outfit with gun, holster, spurs, and a rocking horse. Brother Shaun’s favourite gift was a Johnny Seven Gun—“It really could do seven things!” he still exclaims. Sister Colleen remembers her pink cardboard make-up table and chair. Prima who was our New Year’s Day baby, once thought that she got coal in her sock and howled loudly until our Mom told her she had the wrong sock, it was Dad’s. Mom put a piece of coal in it as a joke! Sister Maureen just tried to find a small, quiet spot behind the tree to play with her new doll. Mike (Michelle) long remembered her doll too, mostly the smell of her brand-new Barbie. Holly was our Boxing Day baby. Mary Ellen’s favourite memory was how special the Christmas tree looked in the moonlight.

How we hated to leave our presents to go to Christmas Mass! Our parents had to remind us that it was Christ’s birthday, and off we went.

This was one of the stories in the book “Christmas in the Maritimes”  A Treasure of Stories and Memories  edited by  Elaine Ingalls Hogg. 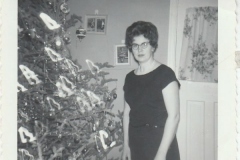 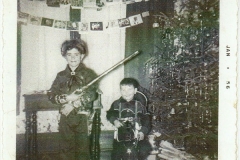 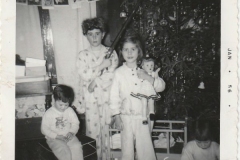 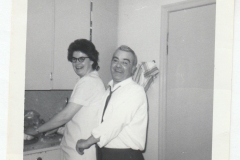 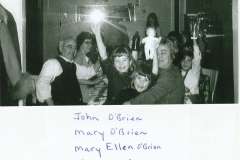 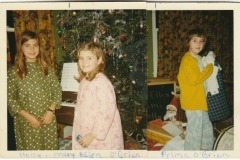 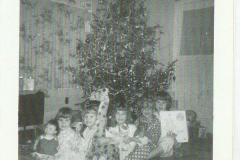 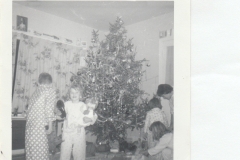