The Simpson’s and Eaton’s Department Stores developed a friendly but competitive rivalry through the years of operation. Both department stores had many employees working for them and it was common to hear the expression “Simpson’s Never Tells Eaton’s Their Business,” Employees at the two stores were encourage not to talk about their company’s operations and this expression continued years later even when it had nothing to do with either store but when a person did not want to tell another person something, they would say, “Does Simpson’s tell Eaton’s their business?” 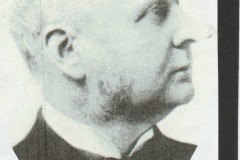 Robert Simpson emigrated from Scotland to Canada in 1855 and eventually opened his own store in Toronto in 1894. Mr. Simpson died in 1897 at the age of 63 years old. After his death the business was sold in March 1898. Three Toronto business men bought the business and kept the Simpson name and expanded both retail and mail order divisions and moved the business eastward to establish an Eastern Branch. 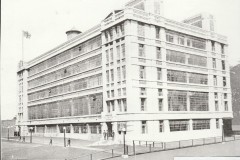 Robert Simpson Eastern Limited opened its first store, which was a mail order store in 1919 on Chebucto Road, near the North West Arm. The Mail-Order Centre shipped its products throughout the Maritimes. At that time people had to walk a long path through the woods to get to the store, because the Armdale Tram Cars only came as far as the Arm Bridge and there were very few automobiles in those days. Apparently the man who purchased the property on Chebucto Road for Simpsons was fired, because they couldn’t believe that he would buy property for the new building in the middle of the woods. 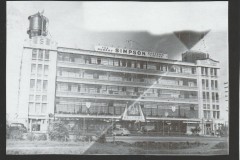 While the Robert Simpson Eastern Ltd. at Halifax was opened primarily as a mail order business, the volume grew to such an extent, that a small retail store was established in 1924 with an attractive Seaview Room Restaurant. A groceteria opened there in 1925, with Lionel Shatford as the manager and the store developed rapidly over the years, with new additions being added to the original building. 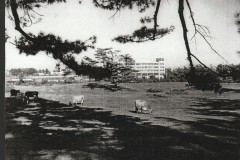 In 1924 the Simpson’s store held carol singing at Christmas time that became an annual event. CHNS, a local radio station in Halifax, gave Christmas broadcasts from the Simpson’s Department Store. Dick Fry was at the Hammond organ with the store employees singing. The Songs were also piped through the Halifax School’s PA systems, so that all the students could hear the songs and sing along to them. 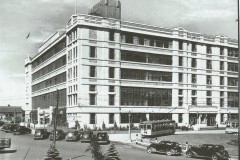 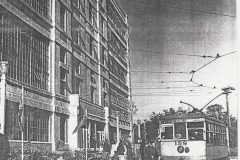 A Tram line was extended to the West End in 1930, with Simpson’s as it destination, later the Nova Scotia Light and Power Trolleys travelled there. A circle drive, at the main entrance to Simpson’s, was constructed so the Trams and Trolleys could transport the customers as close to the front doors as possible.

Also it was convenient that the railroad was close by and the train stopped near there to let people out. It was a good gesture for customers who came from a distance to shop there. 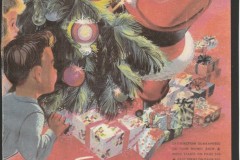 In 1952 the Robert Simpson’s Company became an affiliated of Sears Roebuck, an American business and was renamed Simpson’s Sears.

In 1959 Simpson’s plans were being made to improve access to the department store.

Simpson’s and Irving Oil Service Station at 477 Chebucto Road were in negotiation to demolish the station to make way for a larger entrance to Simpson’s and a larger parking area for customers. At the same time the oil company had plans to acquire an area of the Simpson’s property at 473-to 475 Chebucto Road, for the construction of a new service station. 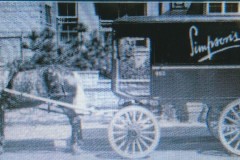 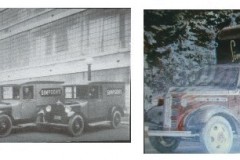 In the 1950s Simpson’s had amazing sales to attract customers to their store. I grew up in Fairview and came from a family of ten children. Periodically Simpson’s had fantastic shoe sales, shoes of good quality leather that would be on sale for just $2.00 a pair. Since my Mom had many children to shoe, she prepared us girls for the big sale, in which she knew half the City would be there. She would say to us, “Now girls sharpen your elbows,” then she continued to tell each of us what size shoes we were to grab. We arrived early and circled the large table in the middle of the floor, which was covered with a cloth. The cloth was removed by a sales lady at a certain time and not before. As the huge crowd gathered around the table, we were not distracted for we were on a mission and we were not going to fail. Impatiently we waited with our hands ready and when the cloth was removed the frenzy started. In no time the table was stripped bare, and some women found that they only had one shoe. They began to look around to see who might be clutching the matching shoe and once spotted the game started, who would get tired and drop the shoe first.

Although this bizarre story happened in B.C. at the Simpsons Sears store, it is worth mentioning.

In early 1957 the manager of the store decided that there was a great opportunity for sales of live baby chicks, so he contacted a hatchery and ordered 25,000 baby chicks. In the first week of February the first 1,000 arrived at the store. They built glass pens on top of the counters and sold 300 the first week.

The next Monday another 1,000 baby chicks arrived, but they only sold 200. That pace continued and then they began to get 2,000 chicks per week, but the sales declined even more. When the staff ran out of space on the floor they built pens in the furnace room, however, this was the source of the ventilation system for the store and the chicken smell spread through the store. As a result, the baby chicks were all given away, except for one who the staff called Rex and he was left to wander about the store. 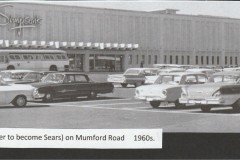 In 1962-63 the business expanded again, with the addition of another floor to the Simpson’s retail operations. It included a larger retail space, as well as a Mumford Road level entrance. At that time Simpson’s employed 600 people in the retail department and 2000 people in the mail-order centre, which was opened in the new building. The new building also included cafeterias and its own infirmary for staff. It was one of the first retail buildings in Atlantic Canada to feature escalators.

In 1973 a new Simpson’s store opened in Dartmouth at the Pen Horne Mall.

In 1975 a new 300,000 square foot retail, warehouse and parking and office complex opened in Halifax. It was a joint venture of Simpson’s Ltd. and Atlantic Shopping Centres Ltd. The new addition shopping mall was located adjacent to Simpson’s Halifax Store and had access from Mumford Road. In addition to Simpson’s existing outdoor parking area, there was new underground parking to accommodate 185 cars.

In 1978 Robert Simpson’s Company was acquired by the Hudson’s Bay Company and the Mumford Road department store was taken over by Sears Canada.

Sears Canada acquired all of the common shares of the T. Eaton Company Ltd. in 1999 and Sears Canada Inc. and Eaton’s amalgamated and continued as Sears Canada Inc. In 2000 Sears moved to the vacated Eaton’s space in the Halifax Shopping Centre. 2018 Sears closed permanently. 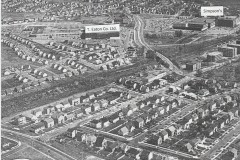 Timothy Eaton was an Irishman who began his apprenticeship for storekeeping in Ireland. At that time he slept under the counter of a store and rose every morning at 5 A.M. and it was there that he learned “the hard knocks of life”. He was a very stern man and one gaze at the junior clerks in the store had them shaking in their shoes. He did not smoke, drink, dance, or play cards. Although he appeared to be a dull person, he was a man of integrity and honesty.

He went to Toronto where he had a job as a clerk and later he opened his own store on Young Street on Dec. 8, 1869. There were no street lights at that time and Lamplighters could be seen lighting the lamps at twilight and putting them out at dawn. There were no telephones and horse and buggies travelled the streets.

He was a shrewd businessman who had a novel idea; he intended to run his business with no credit, (cash only) and with fixed prices, goods to have only one price. His slogan was, “Goods Satisfactory or Money Refunded,” Everyone thought that he would fail, but to the contrary his business thrived. 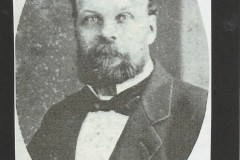 In 1884 the first Eaton Catalogue was printed and that’s when his Mail Order business began, lasting until 1976 when Eaton’s shut down their catalogue operations. 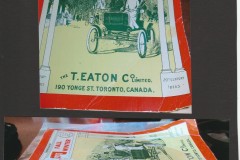 “When the Eaton’s Catalogue Replaced the School Readers”

A school teacher from a little one room schoolhouse in a remote area of Canada used the catalogue to teach her pupils. The school readers that she had been given to teach were practically useless as they were in tatters, so she told each child to bring the Eaton’s Catalogue to school. She thought that the children would learn to read better from the Catalogue. She had each child pick out a paragraph from the catalogue to read out loud. She thought it would be fun for them to read from the different sections: The girls could read from the clothing or china sections, the boys could read from the harness or guns sections and the younger children could turn right to the toy section. This practise improved their reading but the teacher had to stop this new reading procedure because it became so popular that the other classes in the room would stop their work to listen to someone reading from the catalogue, no work was getting done, so the catalogs were sent back home and they resumed back to reading from their old readers. 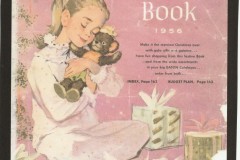 In 1886 T. Eaton had the first passenger elevator installed, but the elevator only “went up” to the other floors, as he wanted his customers to walk down the stairs so they could see the different displays on the way down.

In 1891, the business became a limited stock company and changed its name to the T. Eaton Company Limited.

In 1919 the Mail Order Branch opened in Moncton, New Brunswick for the customers in the Maritime Provinces to help with the delays in transportation of merchandise from Toronto. 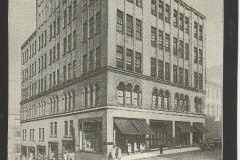 In 1928 the first Eaton’s Department Store in the Maritimes opened in a new brick building on the corner of Prince and Barrington Streets in Halifax. An old building on the site was demolished prior to the construction of the Eaton’s building. The old demolished building was once the home of St. Andrew’s Church, then it belonged to Alexander Stephen and Son, Miller Bros. and Mahon’s Ltd. before it was sold to Eaton’s. 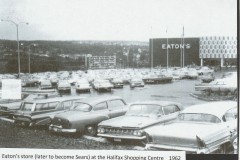 Years later the Eaton’s building became too small to accommodate their customers so they had to look for a larger area where they could build a store and warehouse, along with ample parking to compete with Robert Simpson’s Ltd. In 1956 they purchased 25 acres of land on which the former St. Patrick’s Boys Home stood, on Mumford Road. The land was purchased from the Roman Catholic Corporation of Halifax and it was there that the new Eaton’s building was constructed. 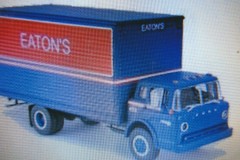 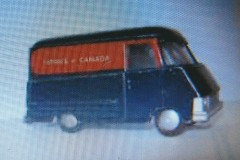 Eaton’s became bankrupt in 1999 and that same year, Sears Canada bought the common shares of the T. Eaton Company Ltd. and Sears Canada and Eaton’s amalgamated and continued at Sears Canada Inc. In 2000 Sears moved into the vacated Eaton’s Department Store site at the Halifax Shopping Centre.