The Nova Scotia Cotton Manufacturing Company was a cotton mill located on the corner of Kempt Road and Robie Street in Halifax.

A cotton mill is a building that houses spinning or weaving machinery for the production of yarn or cloth from cotton. The mill was built in 1882 by building contractor Samuel M. Brookfield who constructed it on twenty-eight and a half acres of land in what was then an isolated section of the city’s north-end. The building was constructed of brick and stone and was three-storey high with 148 tall windows.When it first opened the management recruited experienced textile workers from Lancashire, England. Eighty skilled employees were accepted from nearly one thousand applications and their passage to Halifax was paid for by the Nova Scotia Cotton Manufacturing Company. In August 1883 of the one hundred and ninety-four workers employed, sixty-three were from England, seven from the United States and one hundred and twenty-four were from the city of Halifax. Shortly after twenty-two of the Lancashire workers broke their agreement and left Halifax. 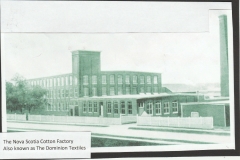 Under the management of W. Stevenson, eight thousand spindles and one hundred and eight looms were working in the mill. In 1884 two hundred and eighty looms were running using fifty bales of raw cotton per week and making about seventy thousand yards of cloth weekly. The cotton factory produced over three million yards of cloth much of which was purchased by local merchants although orders were received from Toronto, Montreal, Quebec, St. John and Newfoundland. In 1890 the cotton factory was Halifax’s second largest industry after the Acadia Sugar Refinery and the Maritimes largest clothing manufacturing business. At that time the factory was taken over by the Dominion Cotton Mills Company of Montreal, later known as Dominion Textiles. To help the company financially, Halifax City Council paid for water pipes and also subsidized construction of a five mile railway line. The railway line ran from the Intercolonial Railway’s yard at Richmond, in Halifax’s north-end through valleys, meadows and gardens to the cotton mill.

At this time the cotton mill was one of the best equipped mills in Canada with four hundred looms and two thousand spindles. It employed three hundred workers to produce one hundred thousand yards of cloth weekly. By then the cloth was sold all over the Dominion and in foreign countries such as China. By 1899 there were three hundred and eighty-four employees working at the mill. Over two million yards of grey cotton alone were brought into the city of Halifax each year. In 1896 a great deal of the land belonging to the cotton factory had been taken over for the Exhibition Grounds at Willow Park. It was a perfect site for the Exhibition Grounds due to the land being flat and near the railway line. When Montreal bought the cotton factory in 1891 there were 317 employees, 146 were women and 131 were young girls under the age of 15.

In 1898 the women who weaved the cotton worked long hours starting early in the morning at 6:30 and worked until 6:30 P.M. six days a week. The employees were subject to very strict discipline rules, if the factory worker arrived one minute late the doors were locked and the late comer had to wait outside until they open the door which could be up to fifteen minutes or more. On a very cold winter morning that could lead to frost bite and ‘to add insult to injury’ the late worker had to pay a fine of ten cents. The labour was cheap, with the girls receiving only seventeen cents, for weaving 124 yards of unbleached cotton. During an interview of one factory girl, she said that people had the opinion that factory girls were rough and didn’t care about working at a better place. She said that was not true and that they didn’t know them because they would not work there if they didn’t have to. She said that some girls started at the factory at a very young age and they had been there so long that is all they knew how to do.

The factory also used child labour, as many young children both boys and girls worked there for from $1.25 to $1.50 per week especially in holiday time. overty drove many young children to work in the factory. Children commonly worked in the spinning rooms of the cotton mill. The children began by doing odd jobs such as stoking fires, fetching tools, and sweeping the floors. One of their tasks was to crawl under moving machines to pick up fallen cotton and another was to crawl on top of the machines to oil moving parts.

no images were found 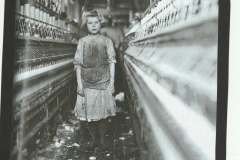 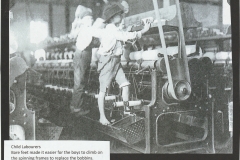 Conditions in the cotton factory were not only very dangerous for young children but the polluted air there was unhealthy. The spinning rooms were very large, filled with machines that were very noisy, damp and dusty, because the cotton released fine particles into the air and soaked the floor with an oily by-product. The air in the cotton mill had to be kept hot and humid (65-80 degrees) to prevent the thread breaking. The workers were breathing in air that was thick with cotton dust, which gave some a lung disease called byssinosis. Many machinery accidents lead to injuries involving arms or legs, burns and even amputation of fingers or limbs; all of these injuries could lead to death. Young girls walked 30 kilometres a day moving back and forth alongside their machines. After twelve hours on their feet working six days a week, some developed rickets, flat feet or bad backs, making it very painful for them to stand or walk. There were no safety rules and the factory owners had no concern for their welfare.

On December 6, 1917 the Cotton Factory was destroyed in the Halifax Explosion. The shock wave caused the concrete floors of the building to collapse and a fire spread quickly through the building causing a great loss of life. The walls and first floor of the mill remained and were roofed over to store supplies for Halifax’s reconstruction. 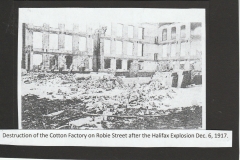 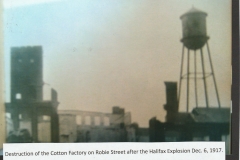 Shortly after the Explosion, W. D. Piercey, a Halifax businessman, purchased what was left of the old cotton factory and its property. He rebuilt the lower story and began a manufacturing building supply outlet called Piercey’s Building Supplies. The business opened in the spring of 1918. The old smoke stack formerly belonging to the cotton mill was still intact and used by the new business. The owner, Piercey had his name put on the tall brick smoke stack and it became a familiar site for many years on Robie Street until it was knocked down after 2010. iercey’s was taken over by Rona in 2010 and the building was demolished in 2015. 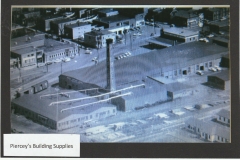 The Day of the Halifax Explosion December 6, 1917 And The Factory Girls Who Worked and Died There

Taken from the book: “The Town That Died” by Michael J. Bird

Lillian Atkins turned to the girl working at the machine next to her and sighed, “My, this morning seems long.” The next thing she knew was that she was on her back on the floor with her right arm, flung instinctively over her eyes to protect them. Her face and her head were cut and bleeding. The Dominion Textile Company’s Cotton Factory had taken the full force of the blast wave and the stone building trembled as though it were made of straw. Workers fell where they stood as if poleaxed, stunned by the immense concussion. The dirty panes of glass in the tall windows, many of them already broken and stuffed with rags, fractured into minute particles and poured in over the machines. First cracks and then great holes appeared in the outer walls. The shock rippled the reinforced concrete floors of the workrooms and they split open.

Terrified, Lillian lay where she had fallen and waited for the world to stop swaying. She prayed hard and earnestly and when at last she staggered upright she went on praying, repeating the familiar lines over and over again. “Our Father which art in Heaven, Hallowed be thy name.” There was wreckage littered all around her and the air was full of hideous sounds. Somewhere in a far corner, a girl, racked by a bubbling cough, was crying loudly. In many places the floor of the spinning room had given way sending tons of concrete and many of the monster machines crashing down through the building to kill and maim. “Thy Kingdom come. Thy will be done in earth, as it is in heaven.” Lillian had no clear idea as to how she was going to get out of the factory. She did not even know if the stairs were still standing but, clambering over broken and twisted metal and edging around the gaping holes, she worked her way towards the door. She found it very difficult at times to keep her balance as, the floor was slippery with blood. All the time she kept praying. “Give us this day our daily bread.” She reached the doorway just as the girl who had been coughing gave a high wailing sob and then died.

The stairs were shaky and misshapen but they had with-stood the blast. Lillian was half-way down to the second floor before she realized that she was bleeding profusely from the cuts on her temple, face, and arm but she was too numb with shock to feel any pain. The second floor was nothing now but a narrow ledge of ragged concrete running along the four walls. Everything else had been taken down by the machines, when they had fallen through from above. On the landing a shattered pipe gushed water, mingling to trickle down her face like cherry soda. “And forgive us our debts, as we forgive our debtors.” The ground floor, a scene of mangled horror, was alive with screams and desperate cries for help.

Lillian wanted to help but there was nothing she could do. Her stomach retched at the terrible things she saw. Dozens of lifeless, unrecognisable forms lay crushed under the rubble and the heavy machines and dozens more, mostly young girls and middle-aged women, were trapped by an arm or a leg, pinned down across the chest or even buried completely except for a foot or five waving fingers. Some of the faces were twisted into savage masks of agony, others were calm and serene as if the brain behind them had accepted the approach of the end. The walls, the masses of concrete and the machinery, ran red with blood. Over against one wall, some of the cotton had caught fire and the flames were spreading rapidly.

“What are you doing up there, you bastards? I tell you my arm’s off!”

The girl could stand it no more. She covered her ears with her hands and stumbled away down the last few steps.

“And lead us not into temptation, but deliver us from evil: For thine is the kingdom and the power and the glory, for ever. Amen…..Amen…..Amen.”

And then she was out of the building and running across Robie Street. Today it is almost 104 years since the Halifax Explosion and the factory girls, who tragically died in the cotton mill, should be remembered.