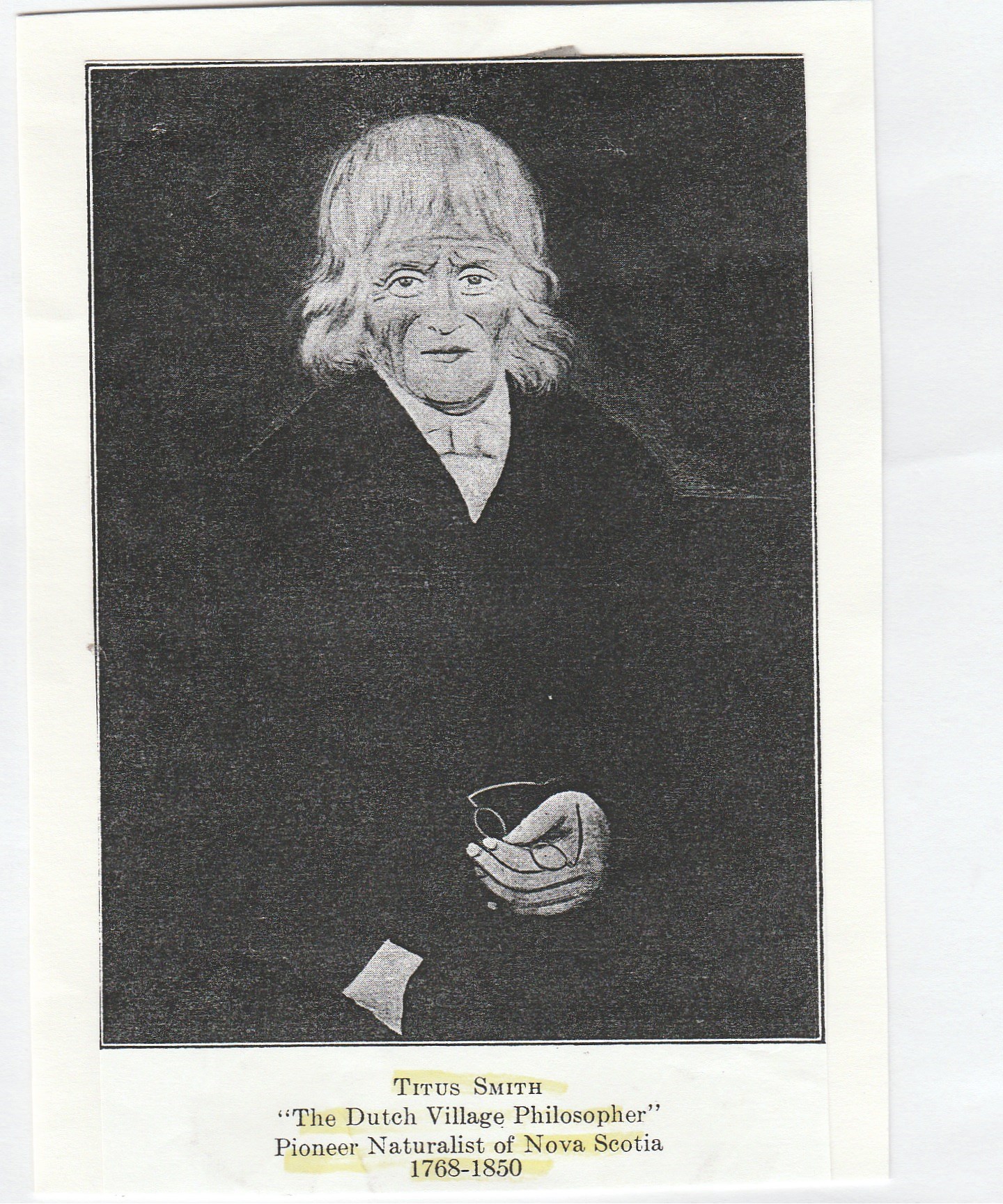 In order to tell the whole story about Titus Jr. I have to talk about his equally interesting father- Titus Smith Senior:

Titus Smith Sr. was born at South Hadley, Massachusetts in June 1734 and died at Dutch Village on September 15, 1807, at the age of 73. During the French and Indian War, he spent two years
(1756- 1757) as a volunteer fighting the frontier Indians, in what is now New York State. In this war, his brother so distinguished himself as a scout that it is claimed he was the original “Hawkeye” in James Fenimore Cooper’s, “The Last of the Mohicans” (1826). On his return from the frontier, Titus Sr. entered Yale College, New Haven and graduated in 1764. Shortly after he and his long time Yale friend Theophilus Chamberlain were both ordained.

Titus Sr. joined the Sandemanian Church and was ordained at Boston. During the American Revolution George Washington asked Titus Sr., who had a considerable knowledge of chemistry, to make gunpowder for the rebel army. He refused to do so because the Sandemanian Religion preached for their members to live peaceably with all men. In 1777, Smith and other Sandemanians signed a declaration of their unwillingness to join in active opposition to the King. As a result, by the act of Assembly, the signers were obliged to leave New Haven. Smith took refuge within the British lines at Brunswick, Long Island, opposite New York. It was there that his wife Damaris, daughter of Aaron Nash and Damaris (Waite) of Granby, died at the age of forty-two years old,(Born Nov.1737, died Aug. 1779) leaving Titus Sr. with three sons: Titus Jr.(Born 1768 in Granby, Mass.), Sylvester( Born 1773 in Danbury and died near Dartmouth, N.S.), and William (Born 1777 in New Haven, Connecticut) , and one daughter: Rebekah (Born 1771 in Danbury, Connecticut) later she became Mrs. Richardson of Litchfield, Connecticut. Subsequently, Titus Smith Sr. married Lydia Barstow, with whom he had no children.

During the evacuation of Loyalists from New York in 1783, Titus Smith Sr. along with his family and good friend Chamberlain arrived in Dartmouth, Nova Scotia. Smith became one of the most prominent of the original Loyalist grantees of the new township of Preston. On the north side of the old Preston Road just west of the Little Salmon River, locality now called Westphal, Smith and his family built a house and cleared the land. As there were numerous Sandemanians among the earlier Boston (1776) and later New York Loyalists (1782), the sect founded a church at Halifax, where Titus Smith served as an elder.

On August 17, 1796 Titus Sr. sold his Preston land, and on October 22, 1796, he purchased property from Martin Wagner consisting of a small house, farm, and fifty acres of woodland- originally lot one (at the northern end of Dutch Village), granted to Frederick Kohl, an early German settler. The property was bounded on the north by the main part of Geizer’s Hill Road (now known as Main Avenue), which ran through the east end of the Smith lot. The Smith home was among apple and other fruit trees about ten metres west of the junction of Dutch Village and the curve of Geizer’s Hill Road; close to where Ashdale Avenue is located today, in Fairview. In 1796, and in the following years, Titus Senior added 22.5 acres to his original land, mostly woodland, which he purchased from Tracy Dennis. This land comprised an original grant made to Abraham.

Titus Jr. was born in Granby, a small village in Hampshire Co., Massachusetts on September 4, 1768. He was the first child of Titus Sr. and his first wife Damaris. When he arrived in Nova Scotia he was only fifteen years old. He was a student of unusual ability and retentive memory, he could repeat a whole chapter of the Bible or recite an entire scene from one of Shakespeare’s play. At an early age he gave every indication of being a genius. When he was just three years old he could read English, when he was seven he gained considerable proficiency in Latin, and when he was twelve he could read English, Latin, Greek, German, and French. He read classics and studied plant life. He attended a private school where he gained proficiency in mathematics and astronomy.

He and his brothers assisted their father in felling timber, clearing land, building notably good stone- walls, and planting, cultivating, and harvesting crops to make their living. He earned his living as a farmer and when he was in his early twenties he became a land surveyor. The Provincial Government appointed him as overseer of roads four times between 1808 and 1829. He then got a commission from Lieutenant Governor Sir John Wentworth to do an extensive survey of the province of Nova Scotia’s interior. Smith was told to visit the most unfrequented parts, particularly the banks and borders of the different rivers, lakes and swamps. He was to report on soil, the situation of the lands, and species, quality and size of the timber. Smith made three trips into the interior where he spent more than 150 days in the woods equipped with only his instructions, a compass, writing material, and a map. He traveled into some of the roughest terrain in the province by horseback. Titus submitted the results in the form of journals, ink drawings of plants, floral lists and descriptions, and a map, which became the only one of the province for over thirty years, His report provides a highly detailed account of Nova Scotia’s forest, rivers, geological features, and wild life. He continued to survey Nova Scotia for forty years. His work as a surveyor often led him into marshland and it is said that whenever he got a pair of new boots, he immediately bored gimlet holes in the soles, so as to let out the water which would necessarily get in.

He belonged to the Sandemanian Religion (now extinct) of which there was no paid clergy, their elders supported themselves solely through their own occupation. The Sandemanian Church was located on the north side of Prince Street, between Barrington and Granville Streets in Halifax. This religion believed in the fundamental equality of man, and therefore thought little of high birth or honorary titles. He only esteemed men for their goodness and knowledge. He was always a poor man, for he set little value on wealth, requiring only what was needed to supply the ordinary wants of his simple, everyday life.

He was a man of unfeigned simplicity, modesty, gentleness and kindness, which, with his store of knowledge, made him a welcome visitor wherever he went. In demeanour he was quiet, humble and retiring. His temperament was a most equable one, he was rarely much elated or depressed; and he was never known to have been angry. His brother said that since the age of two years old, Titus Jr. was never known to cry and seldom to laugh; yet he was youthful and cheerful up to the last. In describing his appearance, he was six feet tall with light blue eyes and had an unusually hardy constitution, as a result of his habitual outdoor life.

His best friend was John Young (Agricola) which is the name John used when writing articles on agriculture for the newspaper. The two had a lot in common, both were enthusiasts about agriculture.

Titus possessed dependable knowledge of the medicinal properties of our wild and cultivated plants, and he frequently was asked to prescribe simple and reliable remedies for many of the common ailments of those about him. It was said that his neighbours survived one of the cholera epidemics in Halifax due to his instructions. Besides his major accomplishments in botany, he made observations to determine the names, characteristics, and habits of our mammals, birds, and fish. To the study of geology and mineralogy he also devoted considerable attention. In local history he was one of our best informative; on his arrival he had taken pains to increase his knowledge by obtaining stories and traditions directly from the early settlers, French, English and German alike.

He was known as the “Dutch Village Philosopher” because of his wide range of knowledge on many subjects.

Titus Smith Jr. married Sarah (Sally) Wisdom of Halifax (daughter of Henry and Lucy ‘Scott’) in January, 1803. The couple had a large family of twelve children. Some of their offspring died young, others moved away to make their living. At least four daughters married in Nova Scotia and have left descendants.

Other graves no longer marked are:

The son of Rufus Bayers, grandson of Titus Smith Jr. was also buried there. Rufus Bayers (1841-1926) later re-landscaped the area, put in paths, had the grass trimmed, and provided rustic benches. Years later the site became a tangle of woodland growth with bushes and weeds running over most of the burial ground. At one time Smith’s tombstone was enclosed by a picket fence. As late as the 1920’s other nearby graves were still visible, marked by native stones, but now all traces of gravestones have disappeared. This old burial ground once overlooked the Bedford Basin, it was a charming, peaceful, bird-frequent, woodland spot that a retiring lover of nature and a thoughtful village philosopher would choose for his eternal sleep. The land in which he is buried was donated by Mrs. H.D. Brunt of MacDonald College, St. Anne de Bellevue, Quebec. Mrs. Brunt is a great granddaughter of Titus Smith Jr. This land was donated to serve as a park and playground. Today a cairn stands in the park to honour Titus Smith Jr., ”The Dutch Village Philosopher.”