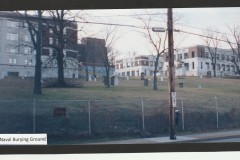 The Naval Cemetery is a small military cemetery located in C.F.B. Stadacona on Gottingen Street, Halifax. The cemetery is situated behind Admiralty House (Maritime Command Museum) on a hill that slopes down to Barrington Street and is enclosed by fencing with a locked gate. In 1894 the cemetery occupied over four acres and many Royal Navy Seamen, Royal Marines, Dockyard workers and their families are buried there. Before 1860 there was no record kept of the interments in the burial ground, until Sir Alexander Milne established a register of death and divided the cemetery into thirty sections.

In the 1870s the Canadian Navy undertook the upkeep of the cemetery. During the 1940s, 50s and 60s some of the wooden markers were removed and only 89 markers remained but by 2001 a group of men from the Canadian Forces Naval Engineering School began to restore and maintain the cemeteries history. It is estimated that there could be 400 or more graves in this cemetery.

William Frank Pye, who was 93 years old in 1972, said he grew up in the north end of H.M. Dockyard known as the Victualling Yard, where his father was a warder, a Dockyard Policemen and was in charge of the gates there. William’s mother was buried in the Naval Cemetery on May 23, 1886 and he remembered across a little path, near her grave four small children were buried, almost the entire family of the Admiral’s head gardener, who died of Diphtheria.

This little known burial ground contains the heroes of many battles, the oldest tombstone was dated 1808 and was that of Frederick Scales, a seaman aboard the ship HMS Vernon. Due to no regular records being documented, the actual amount of history there is not known. Most of the headstones were destroyed by the Halifax Explosion of December 6, 1917. 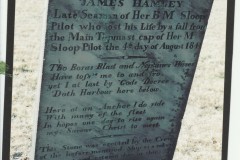 It is the last resting place of many young men who were killed after falling from the top mast of their ships. Also located in the cemetery is an interesting monument in memory of seamen who were lost during the famous battle of the Shannon against the Chesapeake during the War of 1812. The monument is described as a four sided granite block, one side bore the name Shannon and the opposite side, Broke, A ship and her captain. On the third side are the names of some of her crew who had died here of wounds received in that action. A Naval hospital was situated next to the cemetery and that is where injured crew members from both the Shannon and the Chesapeake were taken and many died from their wounds. 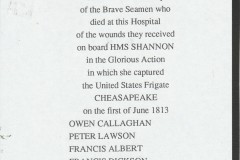 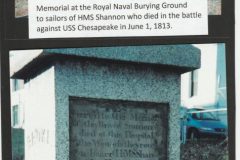 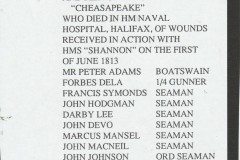 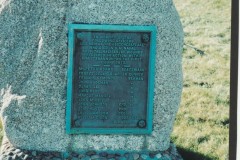 Anyone that wants to visit the Naval Burying Ground can do so by calling Maritime Command Museum at (909) 721-8250 and the staff will arrange a time for your visit so they can open the locked gate to the cemetery.

The naval battle took place on June 1, 1813 just off the coast of Boston Harbour and was one of the bloodiest and shortest battles on record, it lasted only 15 minutes. Captain James Lawrence was in command of the American frigate, the Chesapeake with a crew of 440 men and Captain Philip Broke was in commanded of the British frigate, the Shannon with a crew of 330 men. 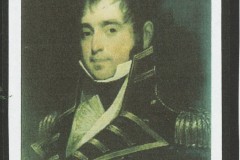 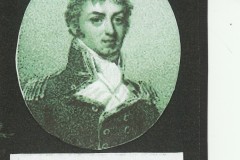 The British Captain sent a challenge to Captain Lawrence of the Chesapeake, to come out and fight, ship to ship; and that invitation was accepted. At about 1 P.M. on June 1, the American frigate weighted anchor and stood out of Boston Roads to meet the Shannon. At 4:50 P.M. the action commenced, the ships being not more than a stone’s throw apart, Boston Lighthouse bearing west at about six leagues distance. After the exchange of a few broadsides, by which the Chesapeake suffered considerably, her tiller ropes being shot away and her wheel broken, she struck the Shannon with her starboard quarter. The Shannon’s anchor fouled the mizzen chains of her opponent, with both ships were side by side, the Shannon’s Boatswain, William Stevens tied the two ships together. A sharp fire of musketry followed, when Captain Broke, observing the enemy flinch from their guns, jumped aboard the quarterdeck of the Chesapeake, sword in hand, shouted “Follow Me Who Can!” and with slight resistance drove most of the crew below. The Americans kept up a heavy fire from their tops, until the men stationed in them were killed or driven on deck. In toll it took only 15 minutes from the being of the confrontation until the Chesapeake was captured and in that short time there were 70 sailors killed and 100 wounded on the Chesapeake and their captain, James Lawrence was severely wounded and died shortly after shouting these famous words, “Don’t Give Up The Ship!” The Shannon had 23 crew members killed and 56 wounded, and their captain seriously wounded with a head wound of which he later survived. 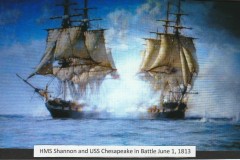 On Sunday morning June6, 1813, the two ships paraded into Halifax Harbour with the HMS Shannon, captained by Lieutenant Provo Wallis, dragging the USS Chesapeake who was flying the British ensign over its American flag as a sign of surrender. The decks were being scrubbed and mopped with the drains running red with blood from the battle.

The people of Halifax were so proud of the capture of a United States ship that some took to their boat and sailed out to greet the ships, while others along the shore waved their handkerchiefs. The sounds of drums and brass filled the air as the garrison bands marched down the hill to greet them. 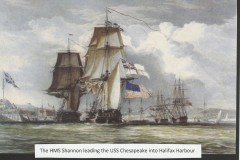 The Chesapeake crew were taken to Melville Prison for the duration of the War of 1812 (1812-1815) and the crew members that died there were buried on Deadman’s Island. Lieutenant Augustise Ludow and Captain Lawrence of the Chesapeake were buried at the Old Burying Ground (St. Paul’s Cemetery) on Barrington Street, Captain Lawrence was buried with all the honours of war at the request of the American Government but soon afterwards his body and that of Lt. Augustise Ludow were exhumed and taken to Boston for subsequent interment at New York, U.S.

The crew members from both ships that were injured were taken to the Naval Hospital and those that were killed are buried at the Royal Naval Dockyard Cemetery and at the Old Burying Ground (St. Paul’s Cemetery). The HMS Shannon was renamed the HMS St. Lawrence in 1844, this was usually done when a ship was no longer seaworthy and was assigned, permanently, to harbour duties. The frigates old name, the HMS Shannon was then given to a liffey-class frigate in 1855. HMS St. Lawrence continued as a receiving ship at Sheerness until she was towed to Chathamin in 1859 and was completely dismantled.

The USS Chesapeake was repaired after the battle with the Shannon, and taken into service by the Royal Navy. In 1819, the Commissioners of the Royal Navy put the frigate up for sale at Plymouth and Joshua Holmes purchased her. In 1820 he dismantled the ship and sold her timbers to John Prior who was building a new mill at Wickham, Hampshire, England. He built the timbers into his new mill, the stout deck beams he laid horizontally to support the floors, the purlins of the deck, he used as jousts and the deck planking went down for flooring. John called his new flour mill the Chesapeake Mill which became a show place because of the bullet marks that pitted its timbers. Some of the timbers were still full of bullet holes which could be plainly seen, together with other scars left on the wood work as reminders of the hard fought duel in the battle of the Shannon and the Chesapeake. In later years, after John Prior owned it, the new miller sometimes dug out a bullet from the beam and gave it away as a memento but it was said that there were still plenty of bullets still imbedded in the timbers.

The Chesapeake Mill remained in operation until 1976 and now serves as a retail centre for antiques and gift sellers. In 1996 a timber fragment from the Chesapeake Mill was returned to the United States and is now on display at the Hampton Roads Naval Museum in Norfolk, Virginia. In 2020 another piece of the original frigate was returned to the United States and given to the U.S. Navy’s Secretary of the Navy. 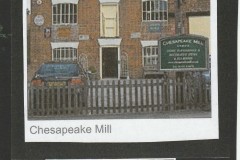 There is a scary tale told that sometimes when thick fog covers the Halifax Harbour, the two frigates the Shannon and the Chesapeake, can be seen sailing into the harbour with blood was dripping off the decks as though the battle had just happened.

Today there are many reminders of the HMS Shannon and the USS Chesapeake found here in Halifax:

1. At the Maritime Museum of the Atlantic on Lower Water Street a number of artefacts from the battle are on display, including the Shannon’s bell and an officer’s chest and the remains of a mess kettle from the Chesapeake. 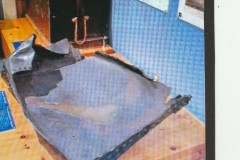 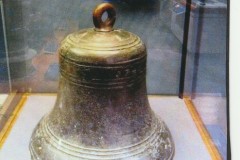 2. At Province House on Hollis Street are two cannons believed to be from the ships: 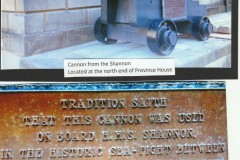 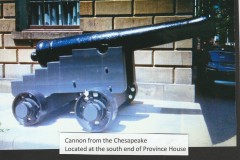 3. There is a cairn at Point Pleasant Park commemorating the battle of the Shannon and the Chesapeake. 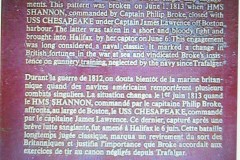 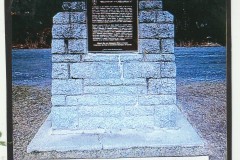 4. At St. Paul’s Church on Barrington Street there is a plaque about William Stevens, the Shannon’s Boat Swan and John Samwell the Shannon’s Midshipman who both died from injuries during the sea battle.

5. At St. Paul’s Cemetery on Barrington Street is where these two men, William Stevens and John Samwell are buried, side by side.

6. Shannon Park in Dartmouth was named after the frigate HMS Shannon.

7. Provo Wallis Street in Halifax is named after Lieutenant Provo Wallis who led the Shannon and the Chesapeake into Halifax Harbour after his senior commanding officer Captain Philip Brook was wounded in the battle. 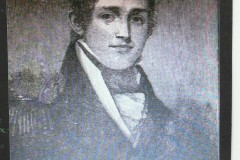 8. In July 2012, the Royal Canadian mint issued a commemorative coin about the Shannon.

The University of Chicago Library have an official catalogue of” The Royal United Service Museum” listing some artifacts from both H.M.S Shannon and USS Chesapeake.

Made out of the taffrail of HMS Shannon, shot away during the action with the American frigate USS Chesapeake June 1, 1813. The walking stick formerly belonged to Mr. D. Ramsby who served as a Baker’s Boy on the Shannon.

Made from the timbers of HMS Shannon after she was broken up in Chatham in November 1859.

Used in the action between the Chesapeake and the Shannon on June 1, 1813.

From the American frigate USS Chesapeake with bullets attached to it for the purpose of sinking it in the event of the capture of the ship, together with a packet of papers relating there to.