At the end of a beautiful floral graced lane a grand old estate once stood. Sounds like the beginning of a fairy tale story but this one is true. Briar Cottage and Briar Lane received their names from the profusion of delicate blooms of Briar Roses which surrounded them.

Briar Cottage was built in the 1830s by Honourable Joseph Allison but he did not call it Briar Cottage at that time. The cottage once stood in an area surrounded by rolling fields of green and had its entrance off Dresden Row with its property proceeding back to Briar Lane. Briar Lane is located off Sackville Street, near the bottom of Citadel Hill. Annandale Street, the street that ran along the side of the cottage was named by John Murphy who called it after a place in Scotland.

The cottage was described as a large rambling general style of architecture, with a pitched roof and dormer windows so popular at that time. The residence had a frost proof cellar that contained two kitchens, and store rooms for vegetables and coal, it also had a pump with good water. The beams that went into the house came from England. A barn, stables and a well were also found on the premises. The property contained a colourful cultivated garden with a variety of fruit trees scattered around the grounds.

Briar Cottage was renovated in the early 1890s, the original eaves were too low so they raised the roof, adding a new mansard roof that had four sides with two slopes on each side. Two storey bay windows were installed in the front of the house and a new three storey entrance was built. There was no change to the porch located to the north of the new entrance. 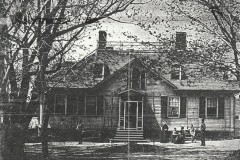 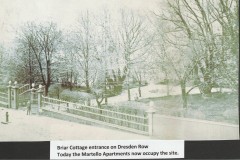 The land was originally owned by John Pyke whose father was killed by the Mi`kmaq in 1751 during a raid on Dartmouth settlement. Joseph Allison who built the cottage, later sold the property to Lewis Johnston, M.D. and it was he who named the house Briar Cottage. The property later sold to Edward Allison, then to William Fairbanks who died in Briar Cottage in 1873. Following William`s wife`s death in 1884, the property sold to Daniel Cronan who lived at one end of his large property, while renting the other side of the land to John Murphy. John Murphy was the founder of J. & M. Murphy, wholesale dry goods, gents` furnishings and small wares. Today the fourth generation of Murphy’s, has evolved into a modern retail business featuring workwear and work boots as well as a wholesale operation suppling linens to Maritime universities, hospitality and healthcare facilities. The company resided on Joseph Howe Drive for many years but sometime after 2018 they moved the business to Wright Avenue in Dartmouth. 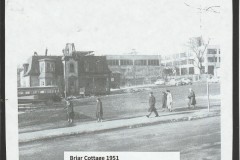 There have been various tales told about the old property on Dresden Row, including one that spoke of treasure buried below the surface of the ground. But quest for the trove apparently has never been successful. When the property was owned by John Murphy a man approached him for permission to dig on his property. With permission granted, the man dug hard for the supposed treasure for two days before finally giving up. Another story goes that a wealthy former resident of Briar Cottage, by the name of Fairbanks, died there and no trace could be found of the large sums of money he was supposed to have possessed. It was believed that he had mistrusted banks to the extent of burying his money near one of the Willow Trees on the property.

In 1942 Briar Cottage was leased to the Norwegian Association Committee as a hostel and as a Norwegian Seaman’s Church. They had their chapel on the first floor and their sleeping quarters on the upper level. Church services were held every Sunday evening in the chapel with refreshments served.

During World War 11, the property was sold to the Nova Scotia Coach Line later known as Acadian Line. In 1942 they built a bus terminal on part of the property on Dresden Row, but it wasn’t until 1951 that Briar Cottage (well over 100 years old) was demolished to make way for more parking spaces for the Acadian Line buses. Today the Martello Apartments now occupy the site where Briar Cottage once stood. The bus terminal was demolished in 1961 to make way for the Dresden Arms Hotel which opened in 1963.

The Lane was once a beautiful pathway to grand old houses from long ago. Briar Rose hedges lined both sides of the path and their intoxicating smell provided for an enjoyable stroll. Sadly today the narrow Lane sits unappealing covered with pavement between an old brick building to the east, that was once the old Sackville Telephone Exchange and to the west of Briar Lane, there is a new complex standing on the site that was once occupied by CBC Radio Station and a car dealership, both housed in a structure known as the Manning Building. The old Building stood on the corner of Sackville Street, Briar Lane and South Park Street. It was built in 1933 by Fred Manning, a Nova Scotia businessman who built a chain of gas stations and car dealership known as the United Service Corporation. Sydney Dumaresq designed the Manning Building. A General Motors showroom, facilities for automobile maintenance and repair as well as a gas station occupied the building. Due to a shortage of space, parking for vehicles was provided on the roof, with access via a specially built elevator. The CBC Radio Station moved into the building in 1944. 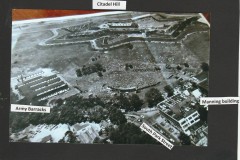 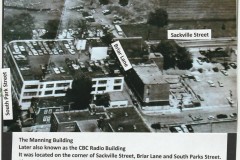 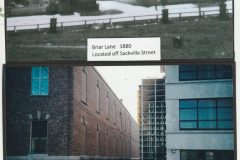 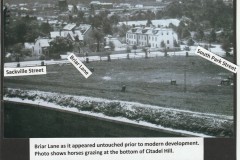 The Manning Building and the adjacent YMCA building were demolished in 2016 to make way for a new condominium building complex, along with a new YMCA called John W. Lindsay YMCA. 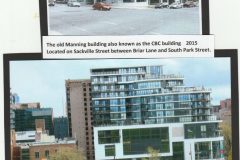 In 1887 a Scotchman by the name of William Lyall moved into a house that stood on the corner of Sackville Street and Briar Lane. He was the author of the book, “Intellect, the Emotions and the Moral Nature,” which was one of the first Canadian books in this field and was used as a text book in many colleges for years. He taught at Dalhousie College, as professor of metaphysics, from 1863 until his death in 1890.

Encroached by the progress of the 21st century Briar Cottage is no longer there today but Briar Lane remains to remind us of a another time in Halifax’s long history.