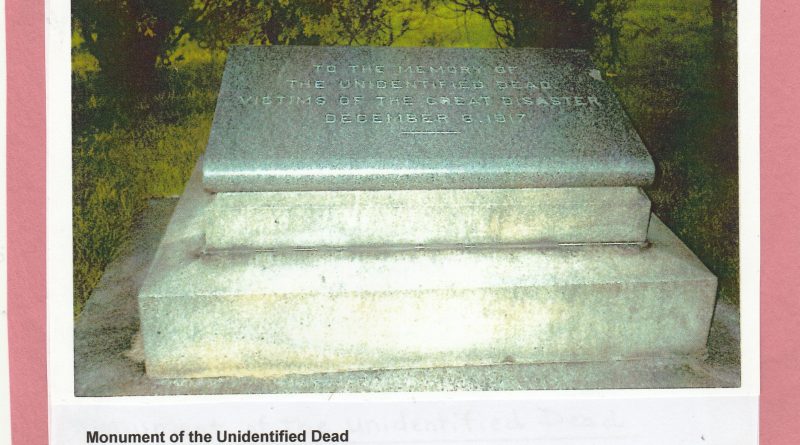 On one of the mass graves of the unidentified dead, there is a monument. It is at the rear end of the Fairview Cemetery, close to Bayers Road and beneath the grass rest the bodies of some 125 persons killed in the blast. There are numbered lists, containing all available data on the individual bodies. Through these facts it was hoped that identification could in time be established. However, in practically every case, this proved a vain hope.  At Province House there are blueprints that identify the exact position where each numbered casket was placed. Two file envelopes also kept at Province House, and which have been retained in the department of the Provincial Secretary, contain documents bearing on a grim side of Nova Scotia’s worst disaster. In these are papers connected with the work of the Mortuary Committee, set up at the time of the Halifax Explosion of Dec. 6, 1917. Maps of the burial areas are in possession of cemetery authorities and copies are also at the office of the Halifax Relief Commission.

An intern report of the Mortuary Committee, to which leadership was given to A.S. Barnstead then Provincial Secretary and in which Alderman R.B. Colwell also had an important role, tells of steps taken within a short time after the fatal blast. It says “All the unidentified dead are numbered, the number being placed inside the coffin, outside the coffin and on a slab at the head of the grave. A check of the graves has been taken, showing the position of the numbered bodies so that if identification is subsequently made we can indicate to relatives as the exact position of the body sought.”

The wooden stakes bearing their numbers have long since disappeared but the blueprints plus the numbered lists still make it possible even at this date to indicate where each body rests. Two large rectangular graves are located at the end of Fairview Cemetery, each containing the remains of some 125 victims and another at Mount Olivet Cemetery where nineteen were buried. The bodies were taken from the temporary mortuary set up in the basement of Chebucto Road School, today the school building is known as the Maritime Conservatory of Performing Arts. 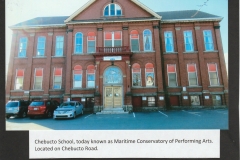 Memories of one of the mass funeral, some few days after the disaster, will never be erased from memories of any of us who had any part in the grim event. A service in which ministers of various denominations took part was held in the open fronting of the school building (Chebucto School). Lines of caskets rested on the frozen ground before a temporary platform upon which stood those associated with the conduct of the service.

On the street were massed hundreds of citizens who came to pay last tribute. Included in the throng were some who believed that the bodies of members of their families might rest in some of the caskets. Due to certain factors the start of the funeral procession was late. There was a blood red sunset to the northwest as the line of vehicles sped down Kempt Road. There could be no slow progress for the winter darkness was not far away.

First came several passenger cars containing members of the officiating clergy and officials linked with the burial. Then came the trucks, some stacked with a half dozen or a dozen caskets. At the end of the line was a big military lorry with some 40 caskets in its tragic cargo. First halt was made at the main gate of Fairview Cemetery, but there it was found that progress could not be made in that direction to the grave prepared bordering Bayers Road.  The line had to swing out through Fairview and along the then unpaved Dutch Village Road to Bayers Road. It was almost dusk when the heart wrenching task of actual burial was undertaken. A work party of soldiers had labored with all diligence, pitting their efforts against the frozen ground. Due to the condition of the earth, the grave they had prepared was necessarily a shallow one. The caskets were borne from their makeshift “hearses” and placed in ordered rows. The numbered stakes which rested upon each lid was removed to be later erected above as soon as the covering earth was in place.  In later years a suitable memorial stone was placed above the mass grave. Outside of the numbered blueprints and the corresponding lists there is no distinguishing marker for individual bodies. 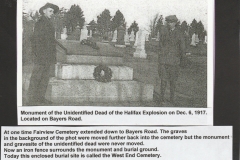 At one time the grave of the Explosion’s unidentified dead was seen by few, for it was little more than a by “country road” within a city. Today it is a paved, much travelled highway. A thick residential area is being built up in close proximity to the site and now close by ground is being taken for erection of a school (St. Andrew’s School). 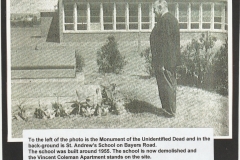 Today the Monument of the Unidentified Dead can be found in the same area on Bayers Road. It is now surrounded by a black rod iron fence and the grave yard is now called the West End Cemetery. The cemetery stands next to the Vincent Coleman Apartment building. Members of the Johnson family are also interred in the West End Cemetery. 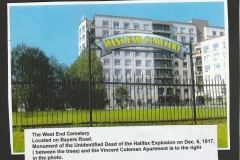 At one time Fairview Lawn Cemetery extended down to Bayers Road, years later graves were moved further back into the cemetery but the monument and the gravesite of the unidentified dead were never moved. 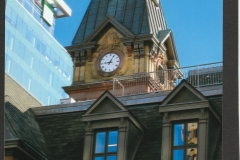