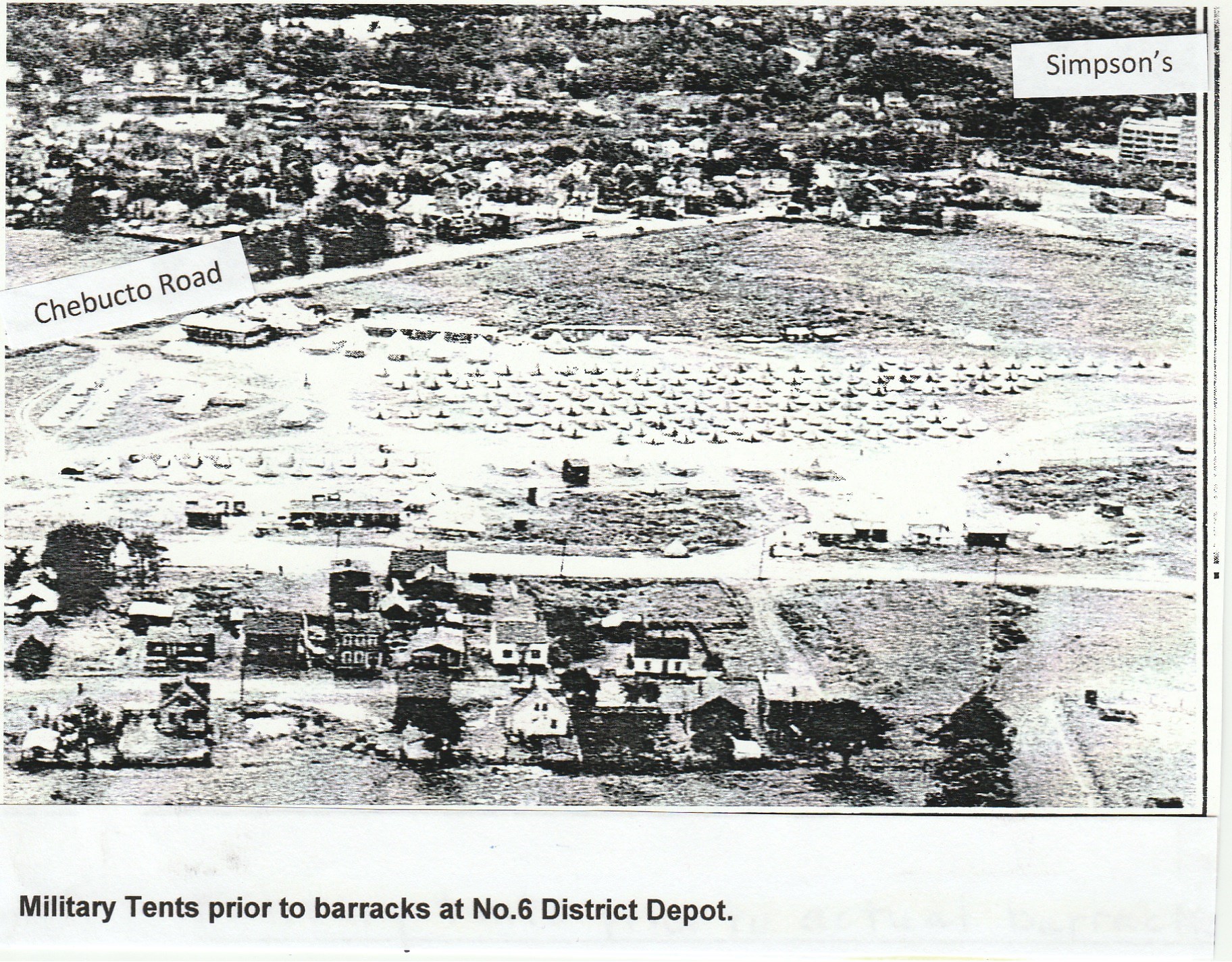 The Depot opened in November 1941 on the northern section of the Municipal Airport Field which was then undeveloped land. Today that area is known as Saunders Park on Chebucto Road, extending to a point where the Westmount subdivision begins.

Every Canadian Army Military District had a camp that was used as a reception and transit facility. These District Depots were Centres where conscripts would report to, upon call-up, and be examined to see if they’d make suitable fodder for the army grist mill. The Department of Physiology examines the qualifications of the men and they are placed in units where their aptitude and intelligence will be used to the best advantage. The standing Medical Board gave each recruit thorough medical tests, the purpose being to see that he is absolutely physically fit before being taken on.

The first No. 6 District Depot has it beginning with two rooms at the old Wellington Barracks. When the Second World War begin because of a large number of personnel moving through or being drafted, a new camp was built on the grounds of the old airport on Chebucto Road.

Lt. Colonel D. A. Guildford, M.C. organized this depot and was in command.

During World War Two, the No. 6 Depot on Chebucto Road was a fully organized military camp, in which as many as 3,000 troops were stationed there at one time. The Depot was built under the direction of the Royal Canadian Engineers. The camp contained seventy buildings, (prior to the buildings being constructed, they had army tents set up in this area) including a hospital, dormitories, detention cells (brig), mess halls, post office, recreation room, and theatre, combined, organized and conducted by the Young Men’ Christian Association (Y.M.C.A.) War Services.

The Y.M.C.A. War Services operated by its motto “Service to the Troops.” Recreation, social and educational service were offered to soldiers at home and abroad to help them cope and try to maintain “Spirit, Mind and Body” balance under extreme stress of the environment. There were facilities for all manner of sports and physical recreation to provide these soldiers
with everything required to maintain them in fighting condition.
.
No. 6 District Depot had an army ball team that played in the Twilight Softball League. The Depot also had a splendid Brass Band of 35 pieces and had their own band room. Sergeant Cawston was the Band Master.

The hospital had ten beds and not only looked after the men who were housed at the Depot, but included the casualties returning from war. The health facility looked after soldiers with minor ailments, not those who were seriously wounded, they were sent to other hospitals. The hospital was clean and very efficient. The Medical Officer was Captain Churchill.

The sleeping quarters at No. 6 Depot consisted of double decker beds situated in each dormitory and were described as being comfortable. The dining halls were commodious and were kept spic and span (clean). The food served was claimed by the men, to be equal to that served in any hotel. The buildings were attractive and simple in design. Every possible modern convenience was
installed at the camp.

At No. 6 District Depot there were house members of practically every unit in the Canadian Active Service Forces (C.A.S.F.) who came from every province in Canada. Some were sent away in drafts and others included casualties returned from overseas. Also stationed there were the men who had served overseas for two years and were sent back to help in training the men at home for war.

The Veterans Guard of Canada during World War Two:

The Veterans Guard of Canada was officially struck off active service in 1947.

Former Polish soldiers were disembarked by groups under a group leader who spoke fluent English. They were finger printed and screened by the R.C.M.P. then passed through the immigration, army recording pay master and customs and were entrained for various parts of Canada. One hundred Polish soldiers were put aboard army transports and taken to No. 6 Army Depot (the Maritime distribution Centre). From here they will be sent out to various farms.

At the various depots, these men will be issued with one army great coat, coveralls, work trousers, work gloves and the balance of their $41 gratuity (payment for service) They are the first of the selected quota of 4,000 agricultural veterans to arrive here. The second group is 1,200 strong, is expected to reach here within the next week aboard the SS Sea Snipe. Four trains will be used to carry the men to various parts of Canada.

No Freedom in Europe:
Polish Soldiers to Make Home Here.

The Polish Soldiers wanted to find a new home in Canada, a country of adoption, where they could cherish the freedom of conscience and freedom from fear and to live as free individuals in a society of freemen. Seventeen hundred of Polish army men under General Anders tough Polish Corps, fought side by side with Canadian troops during the grim battles for the Gothic Line, were prepared to disembark to various parts of Canada.

District No. 6 Depot closes on March 31, 1947 after handling 500,000 men and women and many million in cash and equipment.
The army’s wartime No. 6 District Depot, melting pot and clearing house for every conceivable service difficulty, closes at the end of March.

The Depot became the “Front Door” for more than 40,000 incoming rookie soldiers. After victory, the same Depot became the “Back Door”, for more than 37,000 seasoned veterans headed back to civilian life. In all, more than one-half million men and women of the armed forces passed through this Depot for one purpose or another since it first opened. For many years the Depot recruited and discharged personnel. The Facility was where soldiers had teeth pulled, blood pressure checked, where they were fed, disciplined, rehabilitated and consoled when homesick, issued late passes and trained for battle. It was a red-tape mecca and a front-line unit in a paper war. The moment a soldier became unfit or involved in lengthy disciplinary action, he was sent to the Depot for proper disposal.

At peak capacities often involving several thousand troops, Depot mess halls were pouring out apples and other fruit juices for breakfast, that in a short time, would equal the entire output of the Annapolis Valley apple crop. Every Friday saw thousands of pounds of deep-sea fish, that a few days earlier had been swimming around the East Coast fishing banks, go off the market.
About one million suits of army battledress were shoved over store counters at the Depot to recruits and transient troops. Military tailors were so over-worked with alternations for sub-standard sized recruits that the occasional rookie stood “at attention” on the parade ground while his over-sized trousers remained “standing easy.”

The Depot had at one time a gigantic unit staffed by 1,000 service men and women.