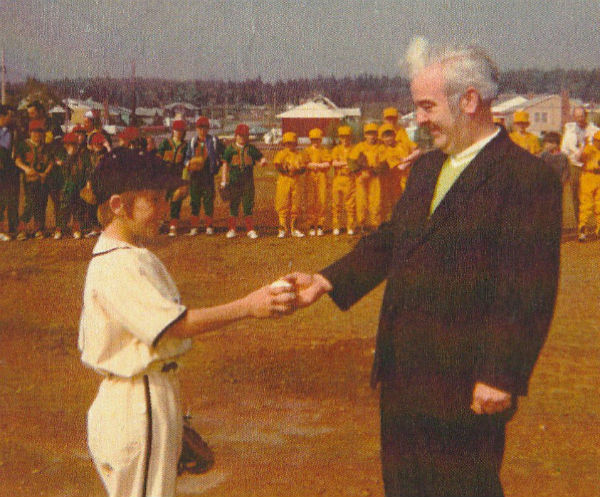 In 1970 Little League Baseball made its debut in Fairview. The ball field (Piercey Field) was a rough, pebble infested infield without the benefit of grass. The field is still there today and another field is at the opposite end and there is a soccer field that is situated next to the playground as well.

The league still thrives today, first called the Fairview Little League then, the Halifax West Minor Baseball Association now it is under the umbrella of the Halifax Minor baseball Association. Children from Fairview, Rockingham, Armdale and Halifax play in different divisions such as Mosquito, Pee-Wee, Bantam and Midget.


More About The Bagpiper – Submitted by Weldon Cant, son of Allan Cant

Allan Cant was the son of Pipe Major James Cant, and was a member of the Scotia Branch #25 Pipe Band in 1945. He was pictured in a photo of the pipe band at that time. He also became the Pipe Major of the Halifax Rifles Pipe Band, which his father had founded. This band played at the funeral of Angus L. MacDonald, Premier of Nova Scotia, and in 1955 took part in the March of 100 Pipers at the Official Opening of the Canso Causeway.

After the Second World War, the Canadian military was further reorganized with active regiments being disbanded, reduced to militia status of combined into new units. The Halifax Rifles (old 63rd) were reduced to reserve status and maintained a pipe band until 1968. The Pipe Major was Jim Cant, 25th Battalion veteran of the First World War. His age forced him to relinquish the appointment to his son Allan, although he continued to play in the band and teach piping in the Halifax area.